We, the Indian Students Association in Kaiserslautern, present to you our annual cultural event – Indischer Abend 2014. We go bigger and better than last time, with a multitude of events to experience the diversity and charms of Indian culture. Everyone gets a chance to savour delicious Indian food and unwind with traditional and Bollywood dance and music, drama, food, presentations and much more….. 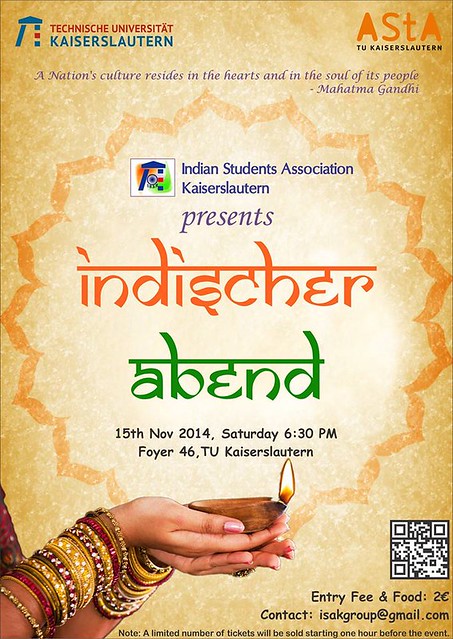 ..some hours before the Indischer Abend (Indian Evening) start, and having been already curious about the event since the very beginning, Sayon told me to be prepared: I would write here my impressions of it.

(Now… let me at least introduce myself (putting all the “labels” in one sentence): I’m a brazilian informatics person very [absurdly!] interested in linguistics, and not used to spicy food (or even to some non-spicy ones, I think the indians would say)) 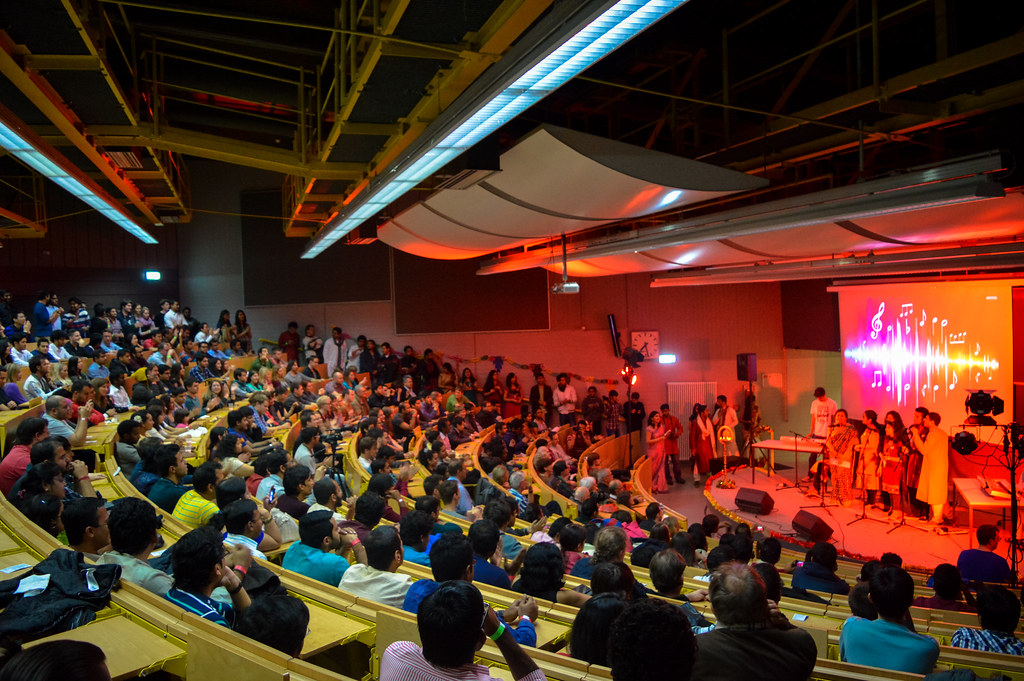 To make sure I would manage to go in (people were expecting a big line!), my friends told me to arrive at 17h (30min before they start to distribute the wristbands that would later — gracefully — allow us to get the food). It turned out 17h was too early. But not as early as I was expecting: as a brazilian, and by our “brazilian way”, I was already “psychologically prepared” to see the event starting some 30min or even 1h late. For my surprise (and relief — it was cold outside) that didn’t happen.

While in the line, I noticed some signs saying that alcoholical drinks were prohibited in the place. One of my friends (who invited me) had already [enthusiastically] told me many times: we don’t need alcohol to have fun!

Upon getting the wristband, I was greeted with the first “typical indian” feature of the evening: the person said “Namaste”. Not knowing what to say, my first reaction was “thanks”. I still don’t know what would be the right way to answer.

[side note: the presenter later said that “Namaste” meant “I bow to you” and I immediately got curious to know if the “te” in the end meant “you”, since many indo-european languages use “t”, “d” or “th” to build their second person singular pronouns (Latin descendants languages use “tu/te/ti/toi”, German uses “du/dich/dir”, English used “thou/thee/thy/thine”, …). It turns out I was [seemingly] right: Namaste on Wikipedia ] 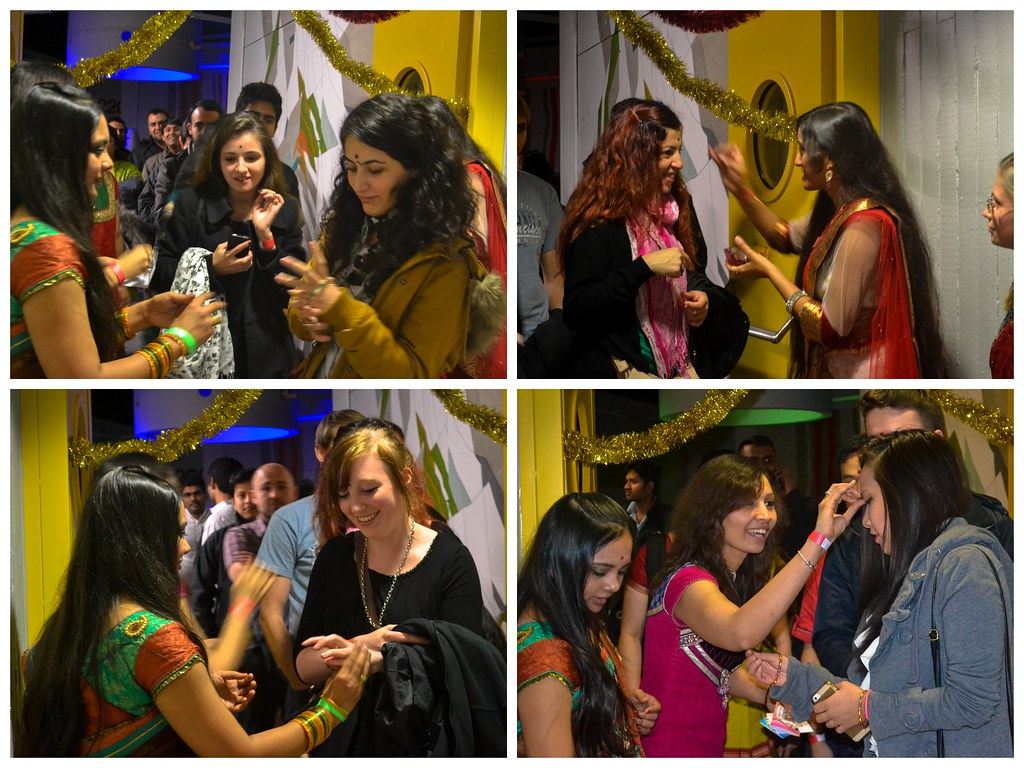 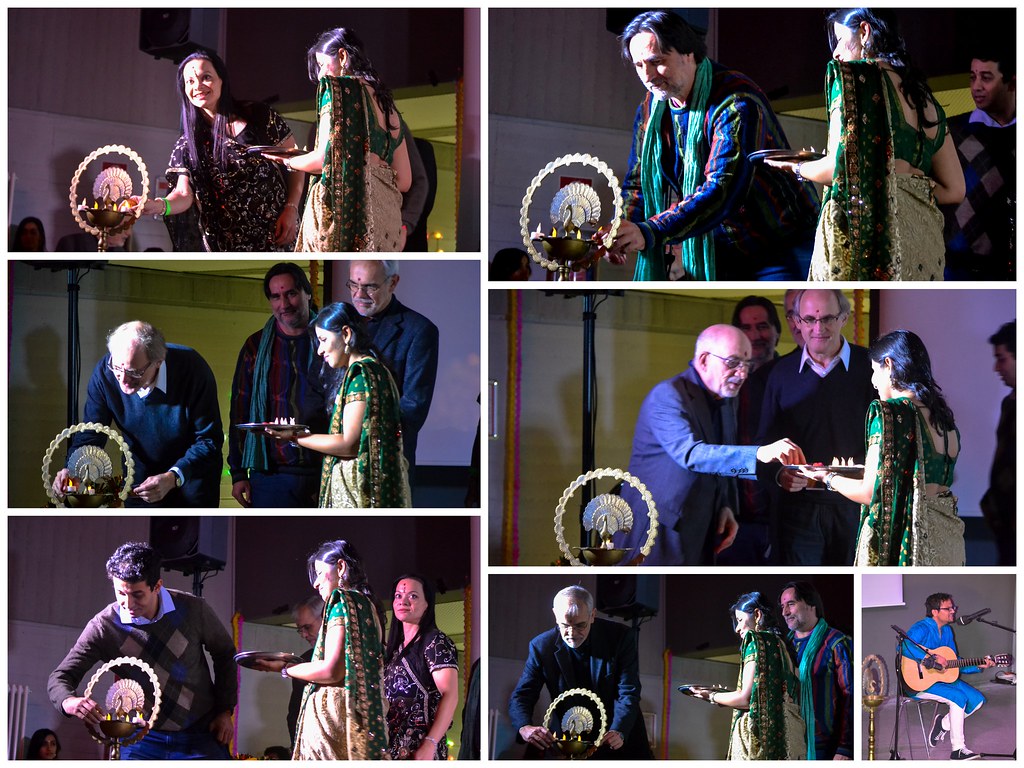 After taking some pink-colored [non-alcoholical] milk-based drink (the name is “rose milk”), I went to the auditorium. But first, in its entrance, everyone was getting a red dot in the front (one of those that one stereotypically sees indians with). Sayon told me its name it “Tilak”. Some hours later, when I arrived at home, it proved fairly difficult to remove (in fact, when writing this, I still have the impression I didn’t manage to remove it completely). 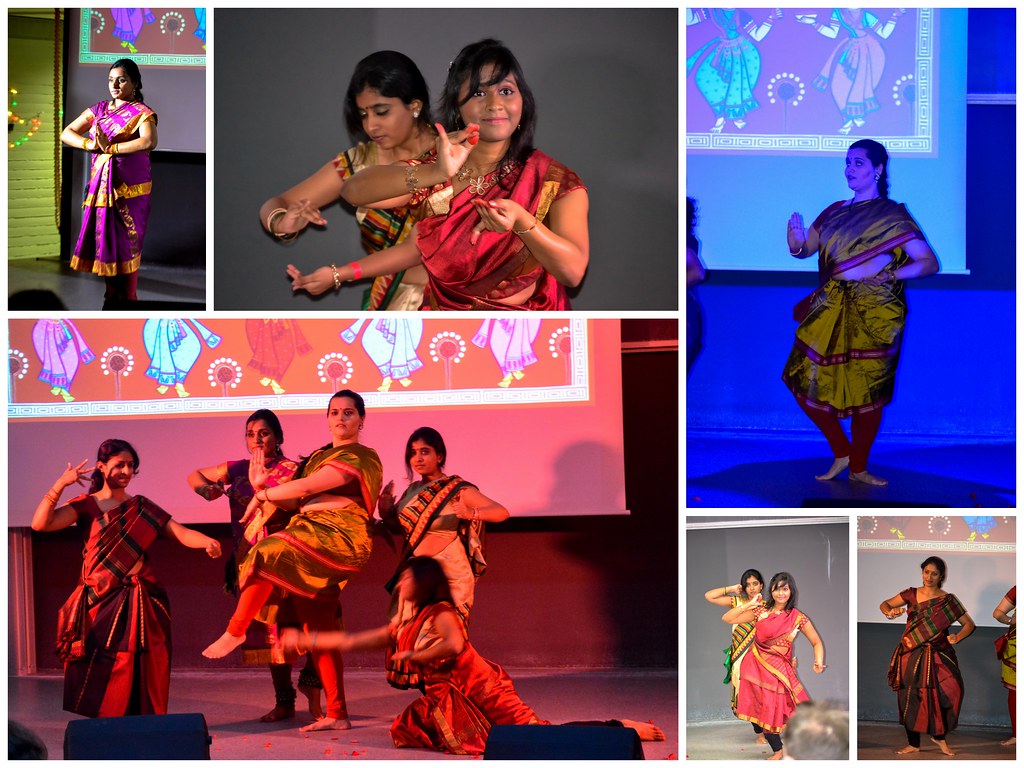 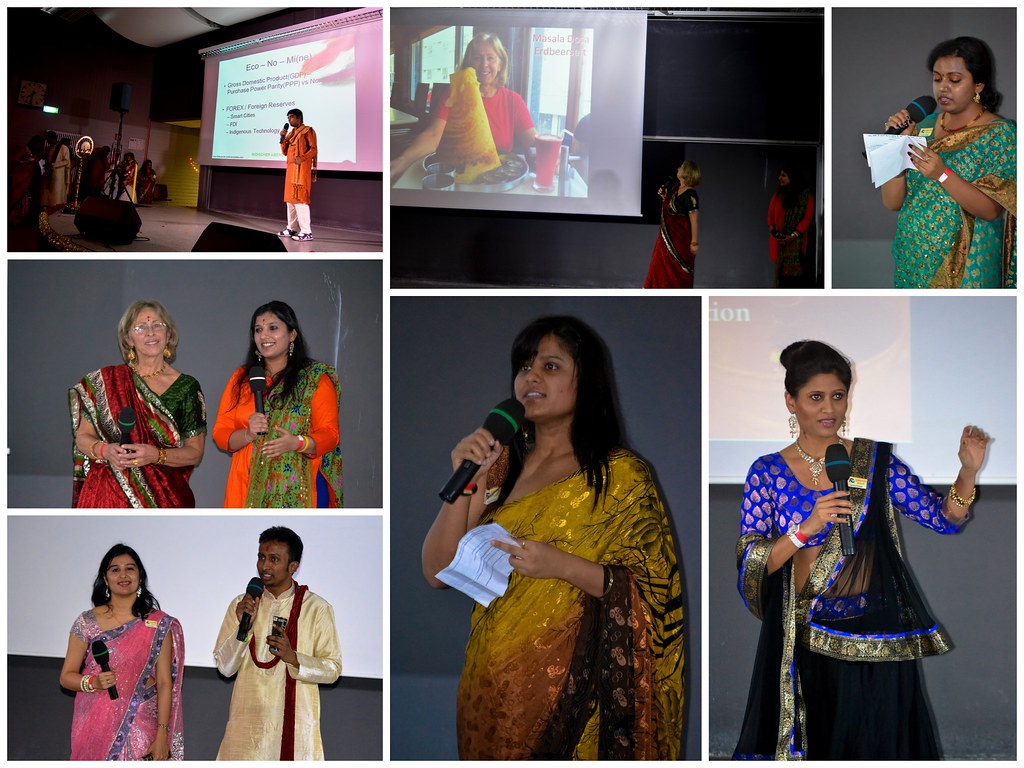 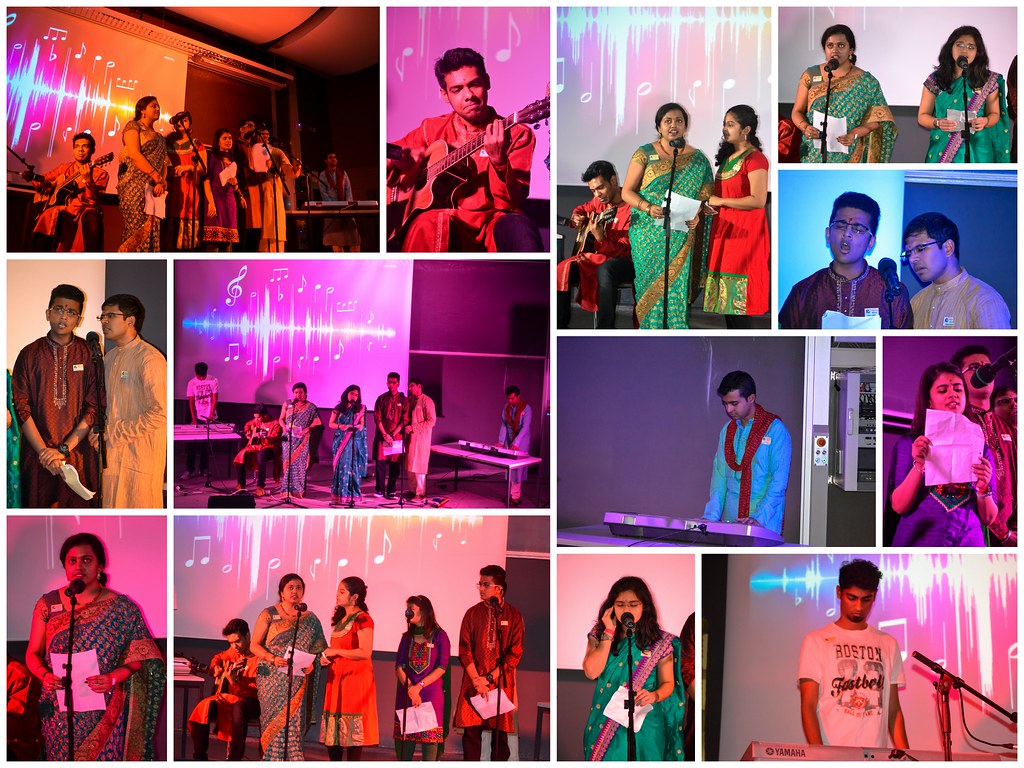 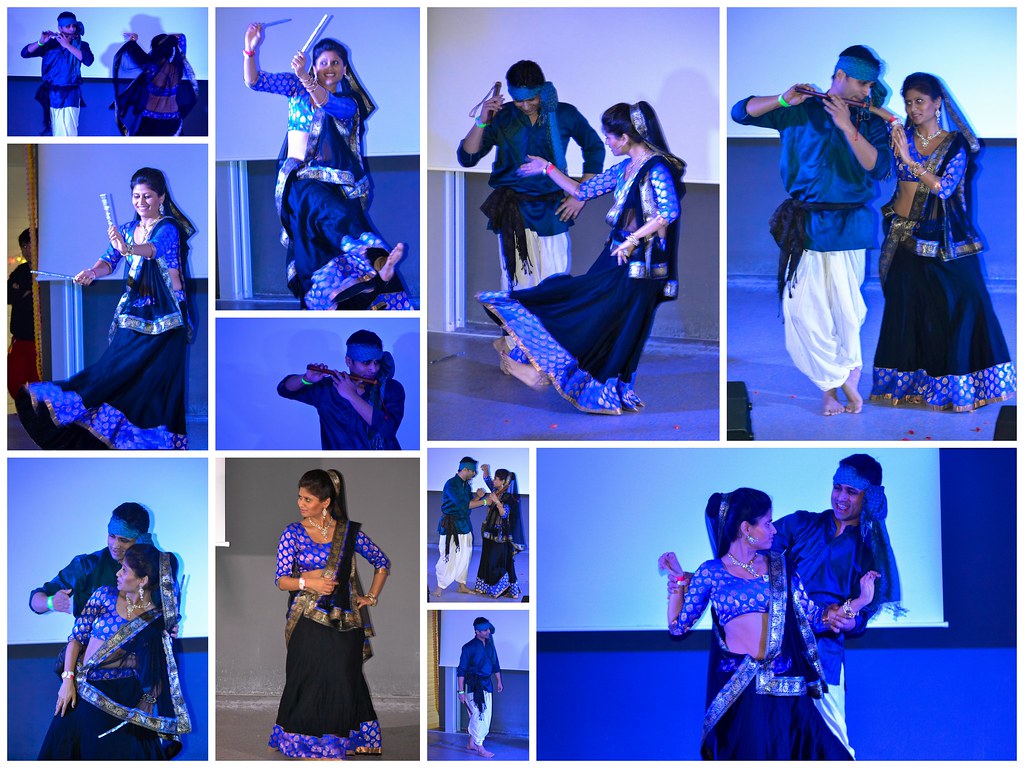 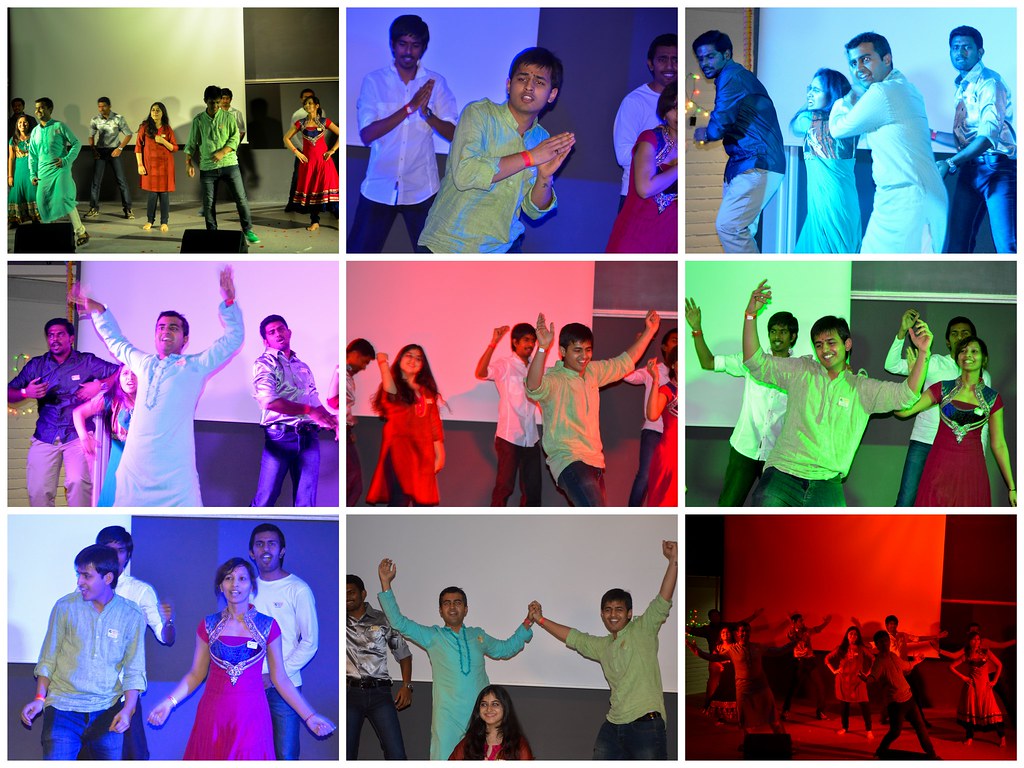 In the auditorium, dances and performances were mixed with presentations about the current economical and technological status of India. Here, the Bollywood dance deserves a mention: I had no idea people actually danced that! (I thought it was just something you saw in their movies lol) 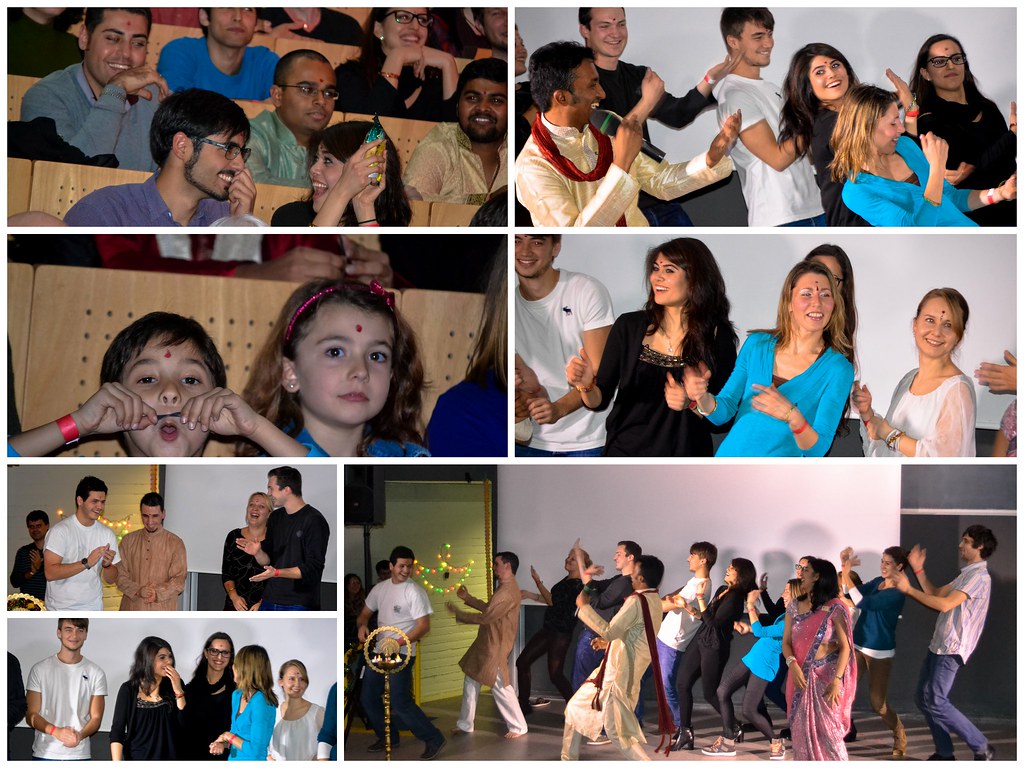 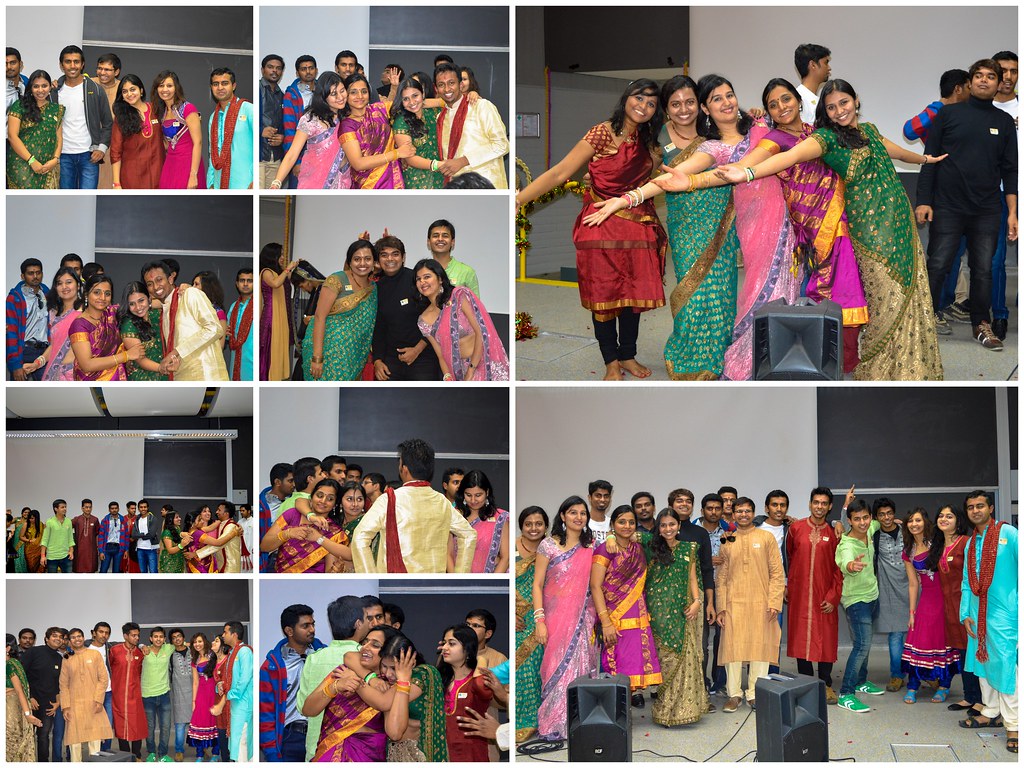 Having previously learned about the cultural diversity of the country, and being so “unknowledgeable” about which are the differences between each region, it was difficult (for me) to tell what, among the things we saw, was local to a certain region, and what was more general throughout the entire country. The same happened with the food: at some point, I started to ask several people which food was from which place, and what were the ones that I’d find everywhere. 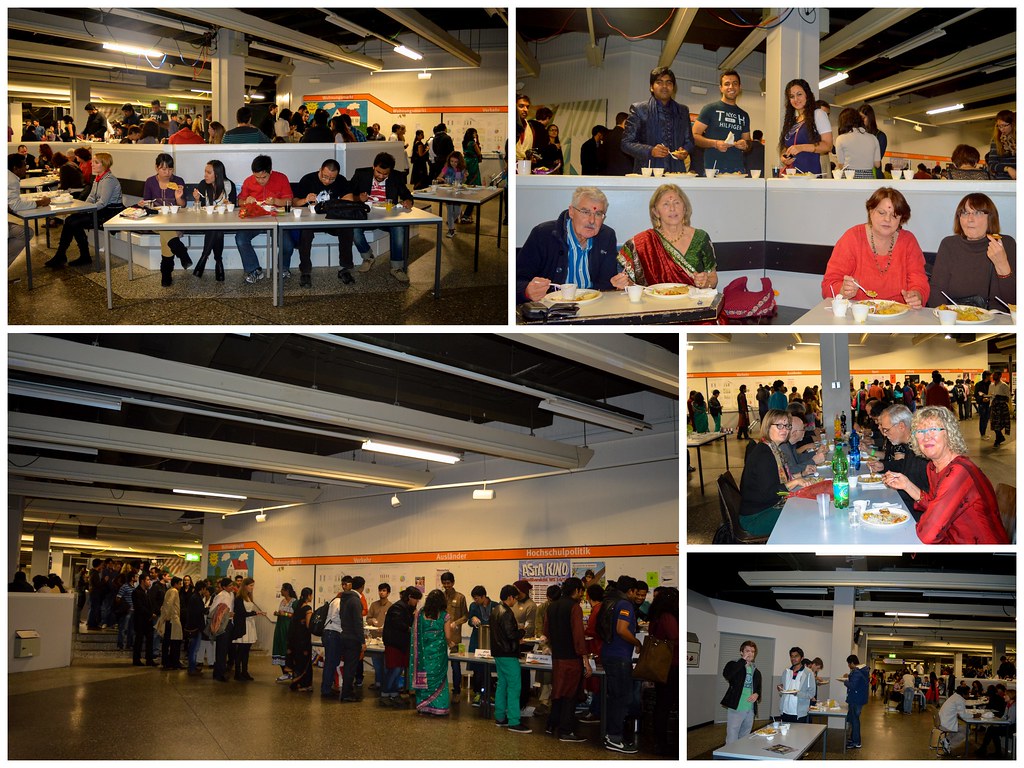 Talking about food, after the presentations, we went to eat. The line was huge [!!!], but there was certainly food for everyone =) Though they said it would not be spicy, it is true that it was a little “hot” for me (but they even provided yogurt for us weak ones). 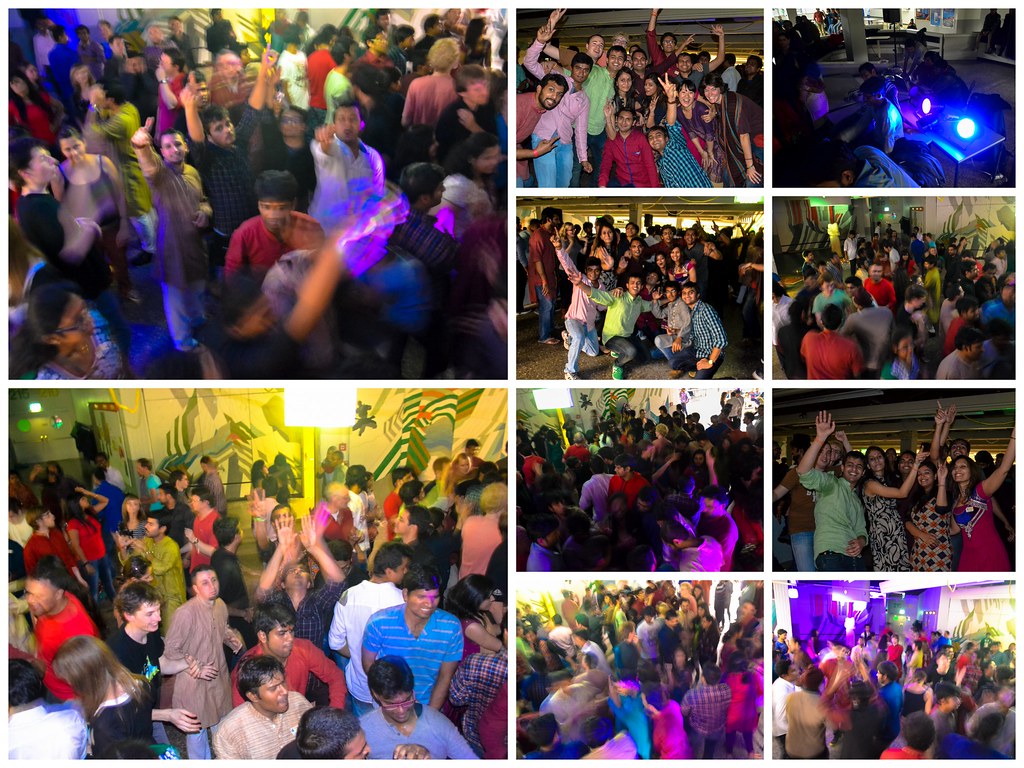 At some point while I was eating, they opened the dance floor, and the music became louder. People went to dance, but I stayed away (except for a moment when some people literally dragged me into the dance floor v_v). I preferred to just talk, use the moment to ask the indians I know (and actually now I realize they are even more than I thought) about their regional cultural differences, their food and [of course] their languages.

When going out, I kept thinking: everyone was really having fun. Imagine if they had alcohol =)

Note: The Blog in Potugese.