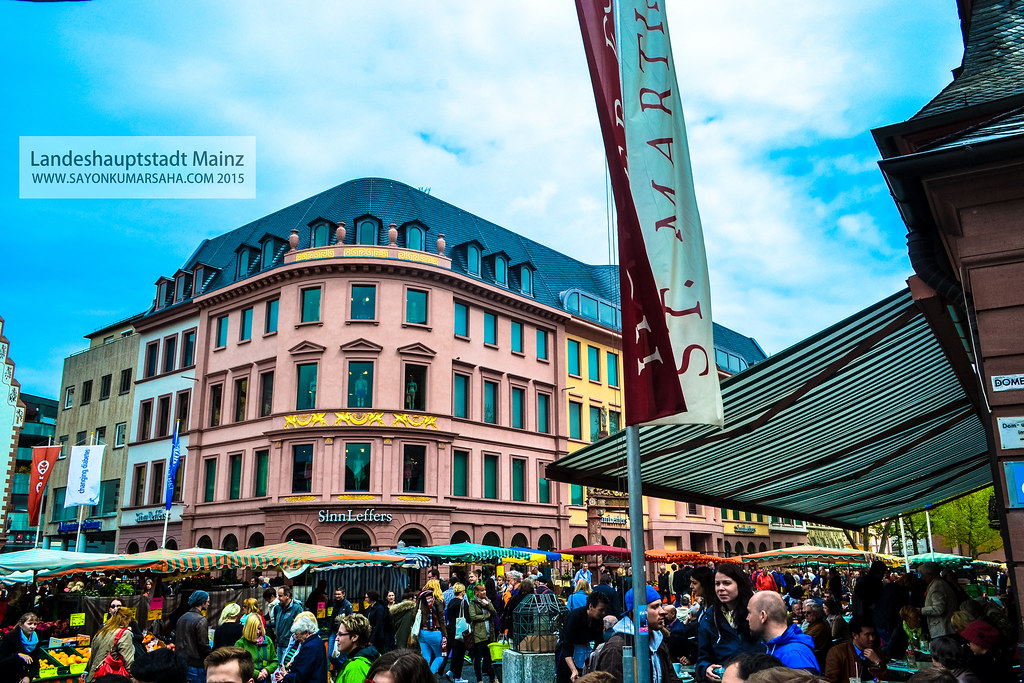 That’s typical Saturday afternoon market at the heart of the city! 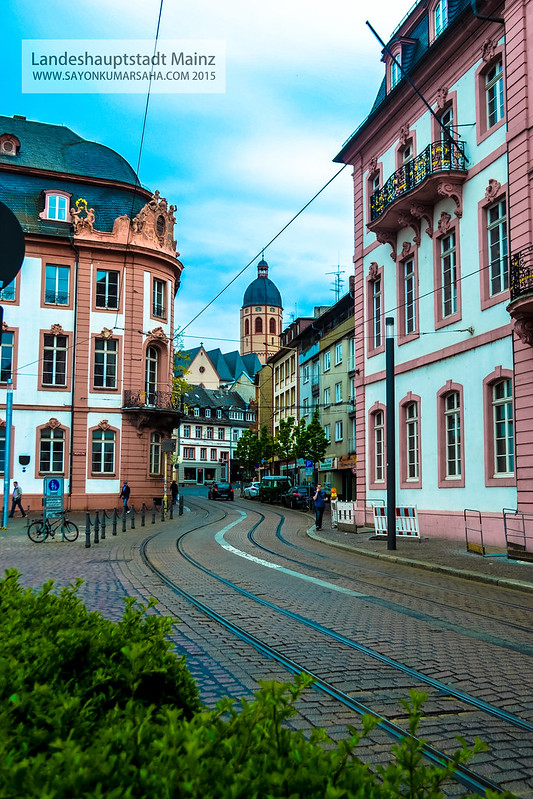 The Roman stronghold,  the precursor to Mainz was founded as early as 12/13 BC. 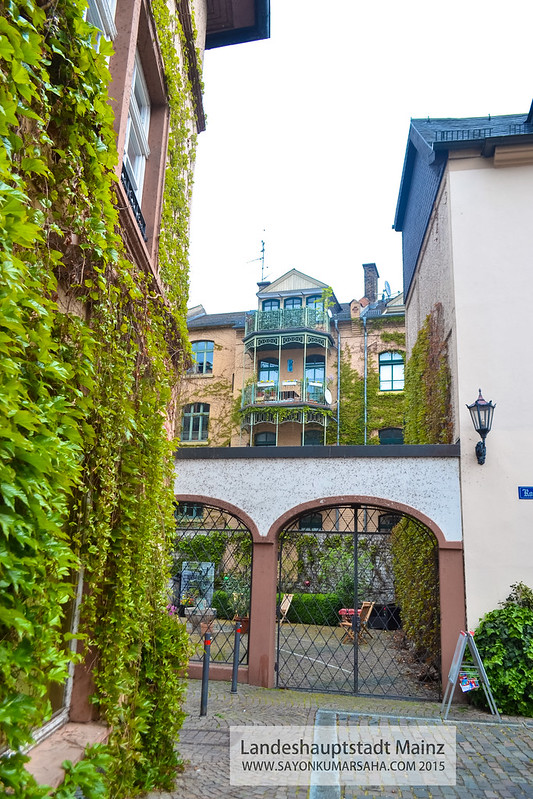 From the early Jewish community in the 10th century AD, Rhenish Hesse in 1800s and the World War in 20th century, the beautiful city of Mainz looked through a lot. 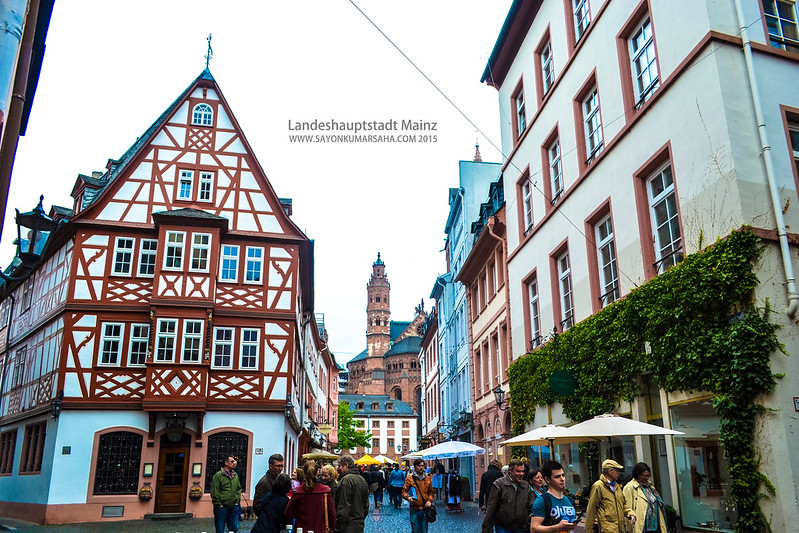 More than 80% of the city was shattered and destroyed with over 30 air raids during World War II. 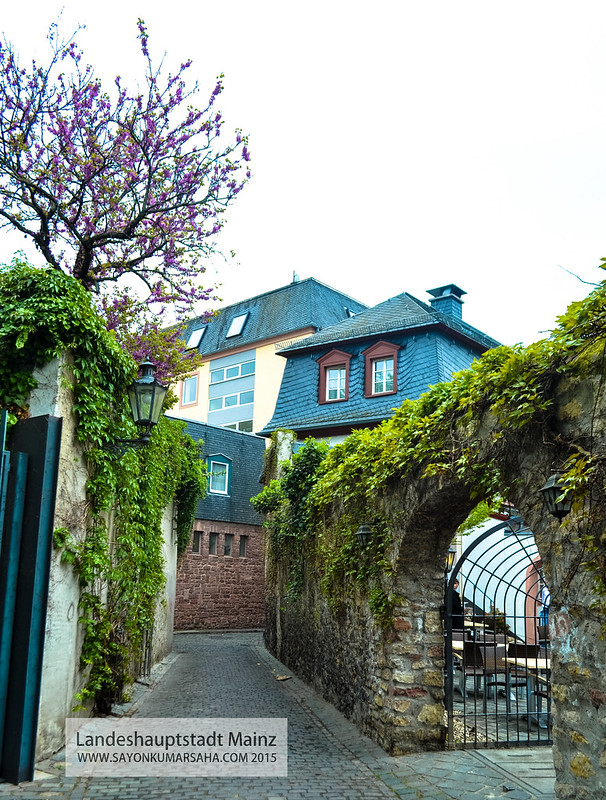 Although most of the historic buildings were brought down to crumbs, some of the high rise stayed surprisingly intact. 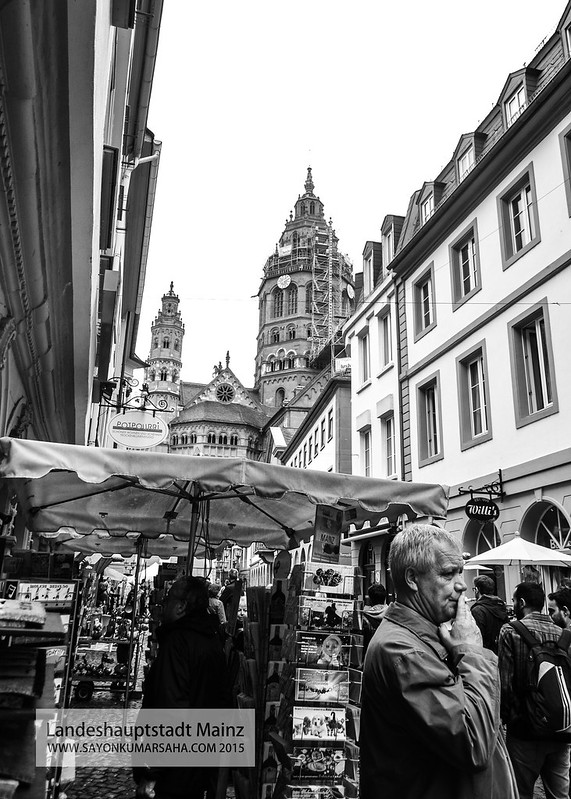 The Mainz Cathedral being one of them. 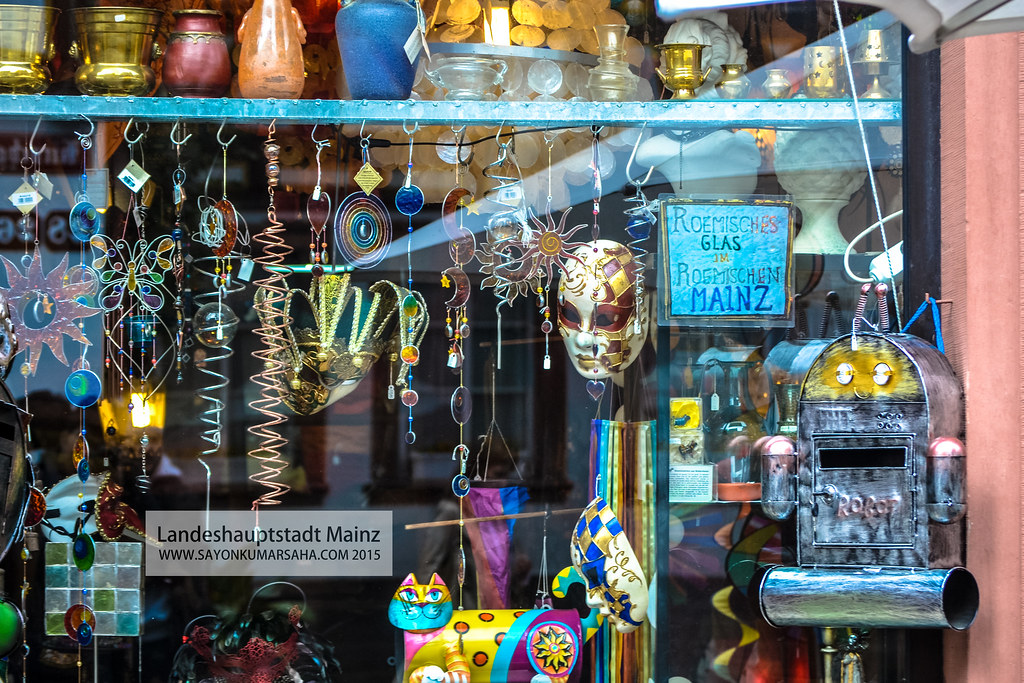 Some believe it was a mere coincidence, whereas some think it was intentionally planned that way so that the high rises would keep helping in the orientation, making navigation easy. 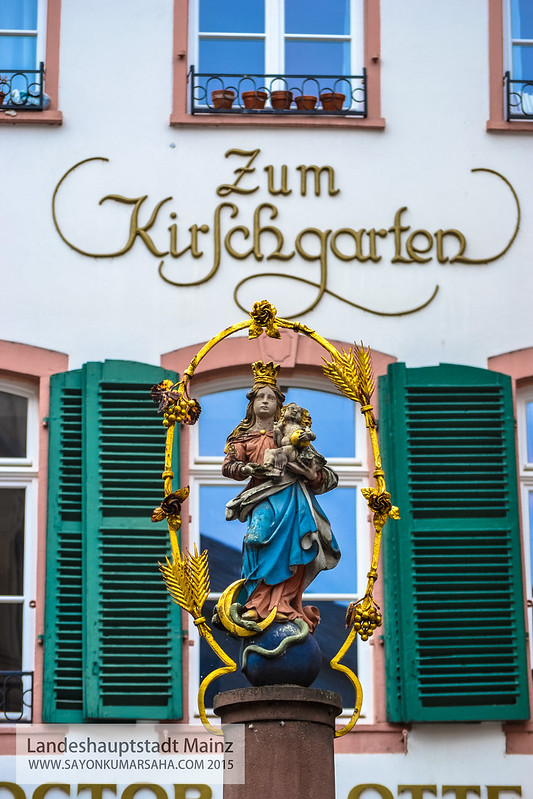 The irrecoverable destruction caused by the bombing led to the exceptional building boom in the history of the town. The urban renewable completely made over the city. 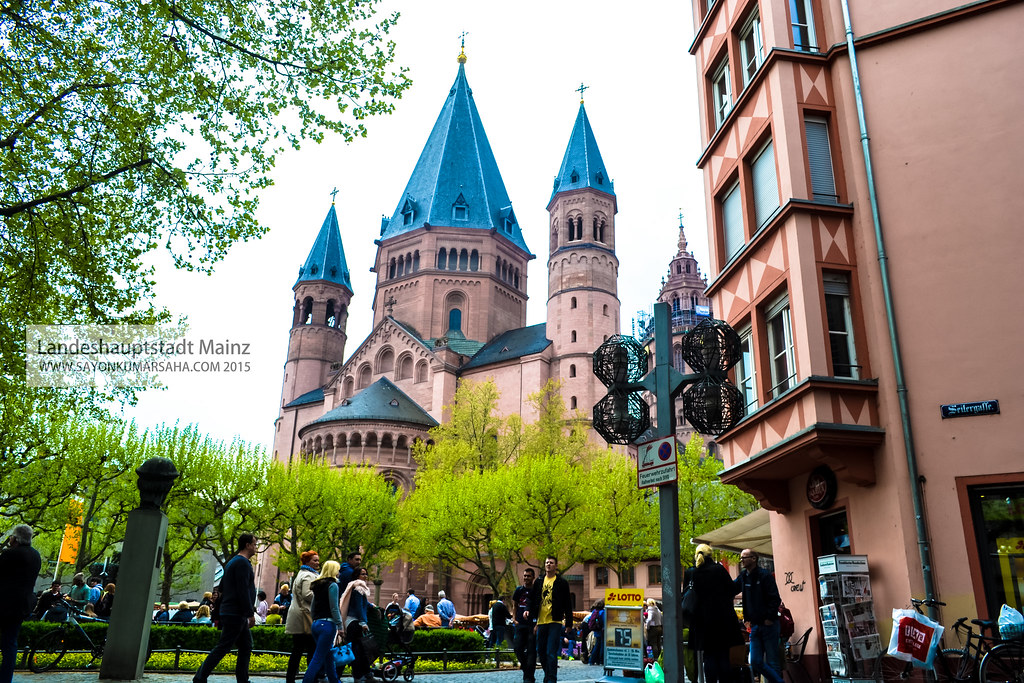 The 1000 year old St. Martin’s Cathedral or Mainz Cathedral (untouched during World War II) remains one of the most beautiful part of the city. 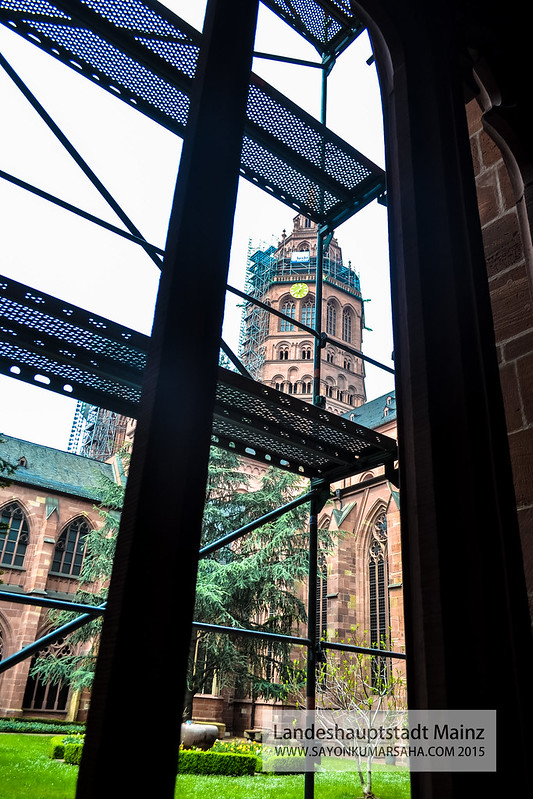 A site of episcopal see of the Bishop of Mainz. 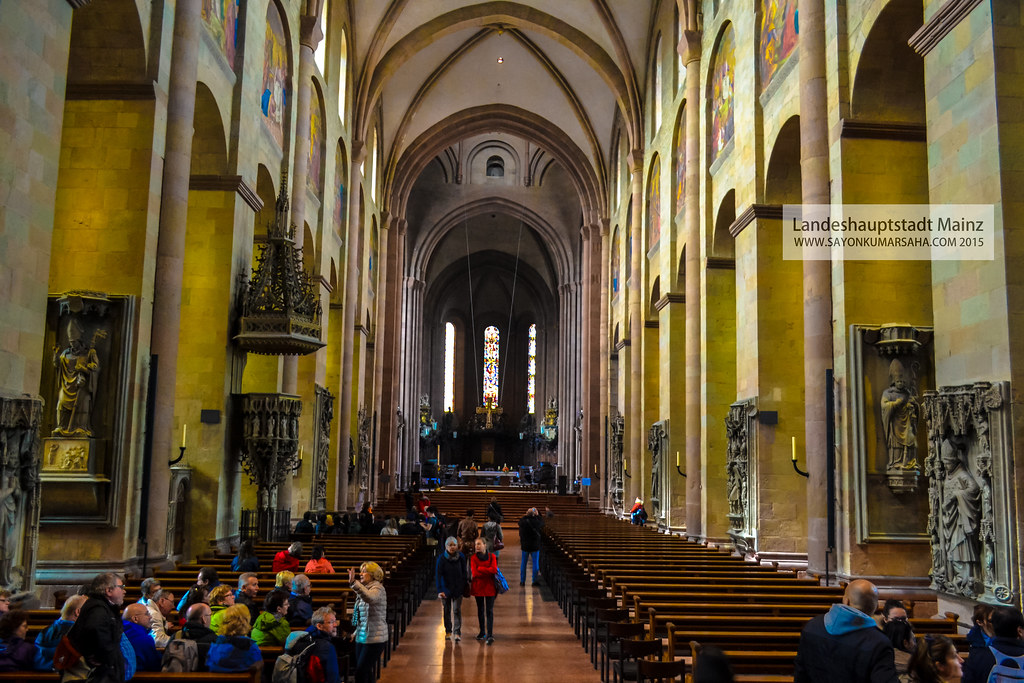 A total of six monarchs were crowned in this cathedral, and thus the architecture went through changes through the time. 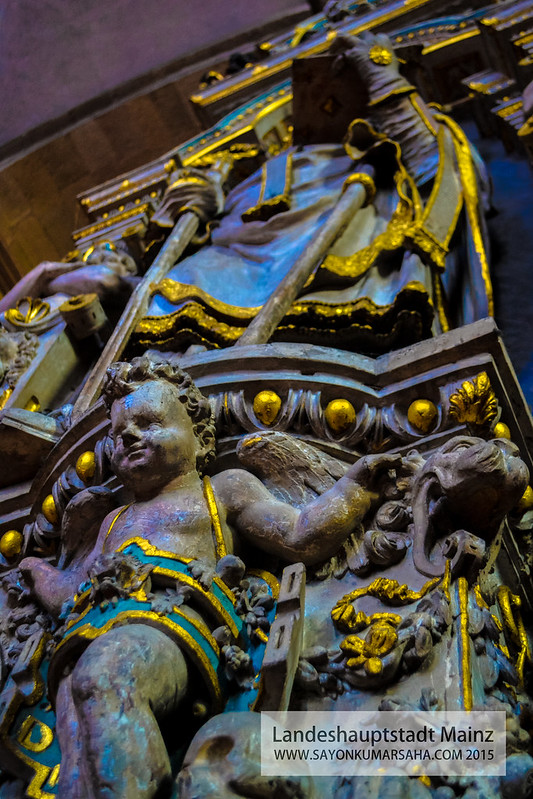 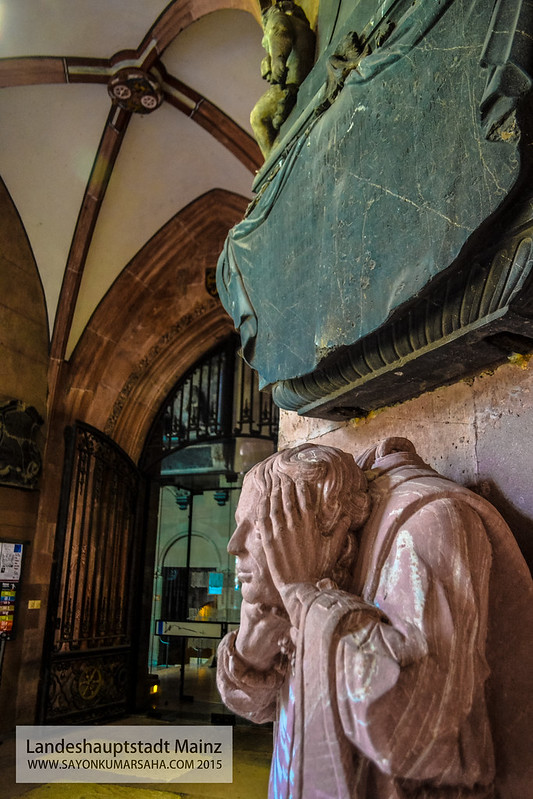 There was widespread fire more than once, and the evolution continued. 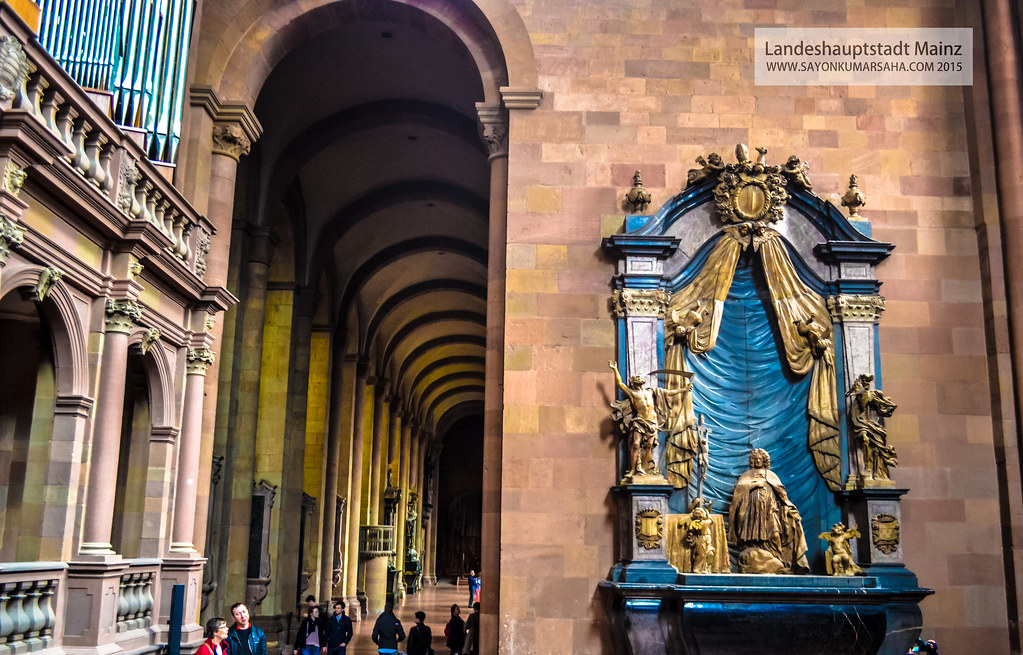 There were a lot of Gothic and Baroque additions in the post Romansque period. 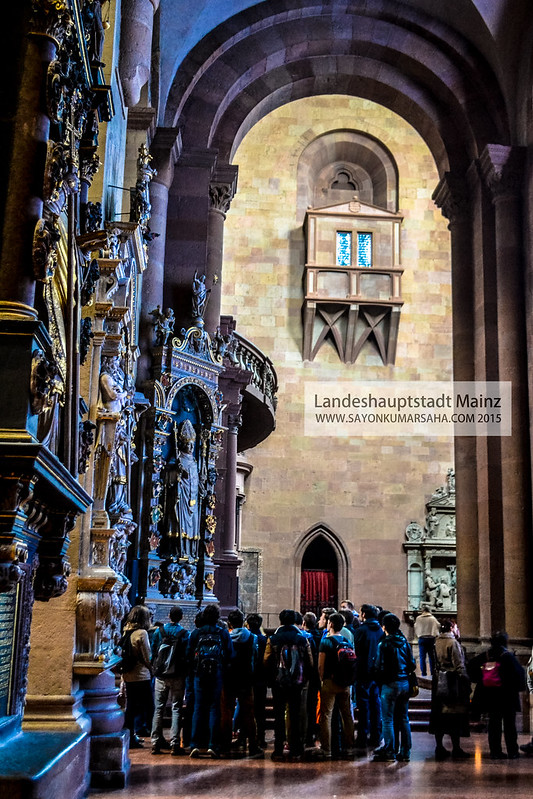 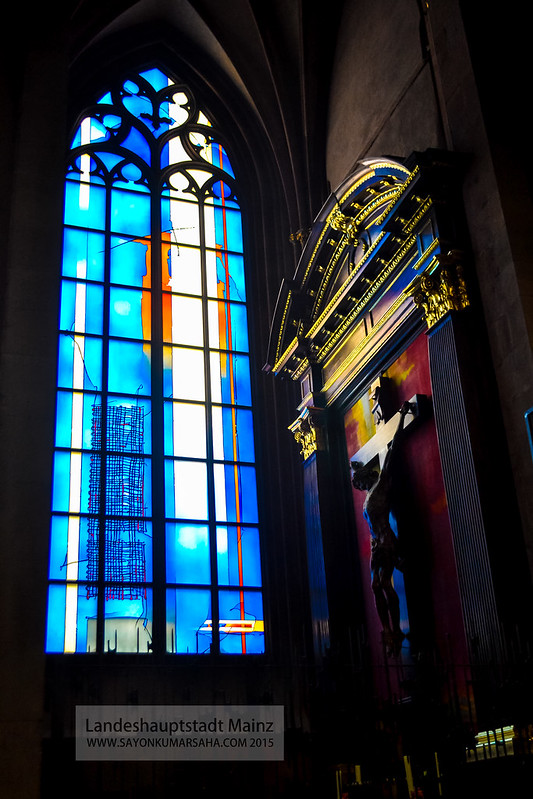 The cathedral might not have one of the perfect blend of architecture but as many local people quote, that its perfectly imperfect considering the varieties and mixtures it has, when it comes to art. 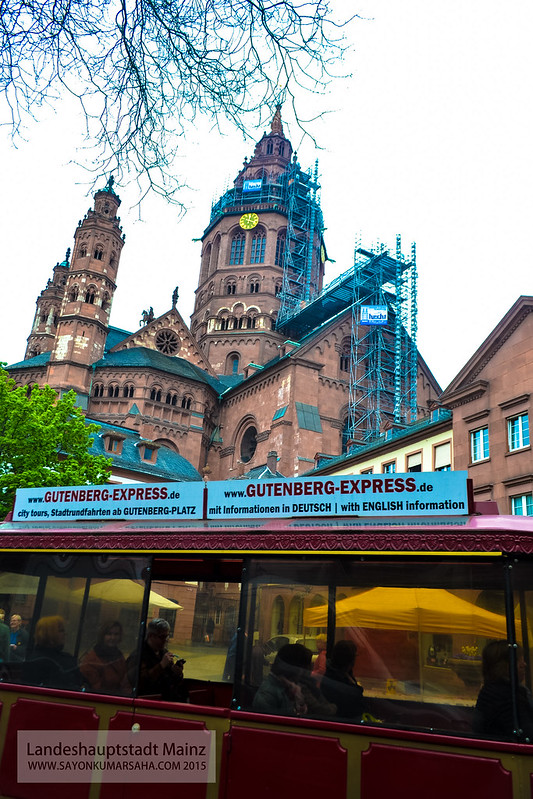 The city is famous for it’s printing press. Yes. Johannes Gutenberg. Home of the invention of the first movable type printer in the early 1400. The Gutenberg Museum here is fascinating and one can spend hours exploring the evolution of print over the centuries (photography prohibited). 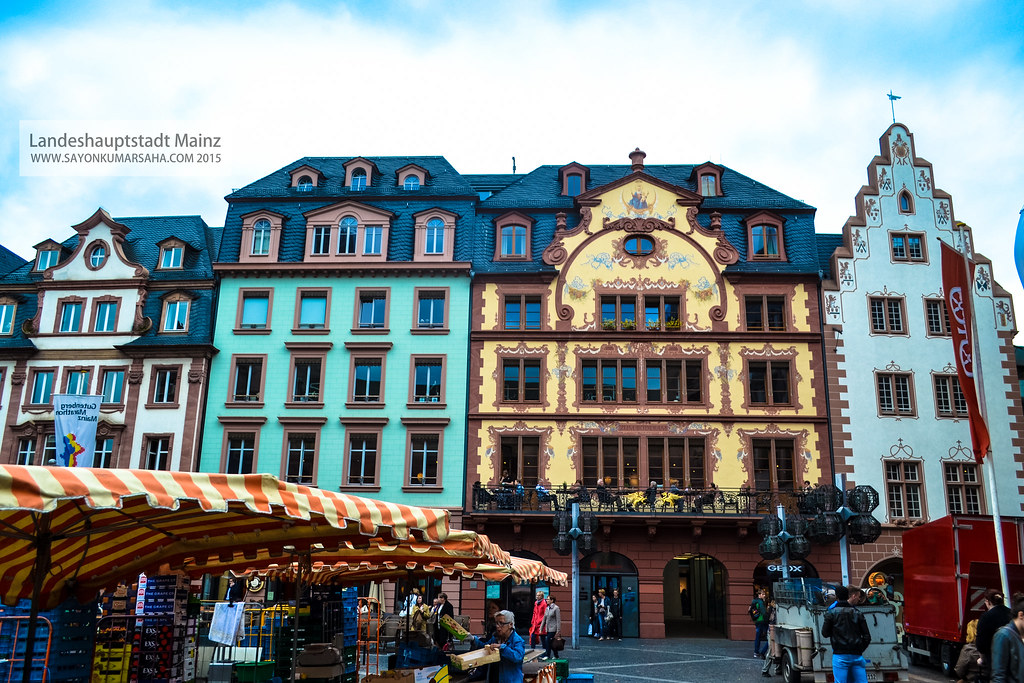 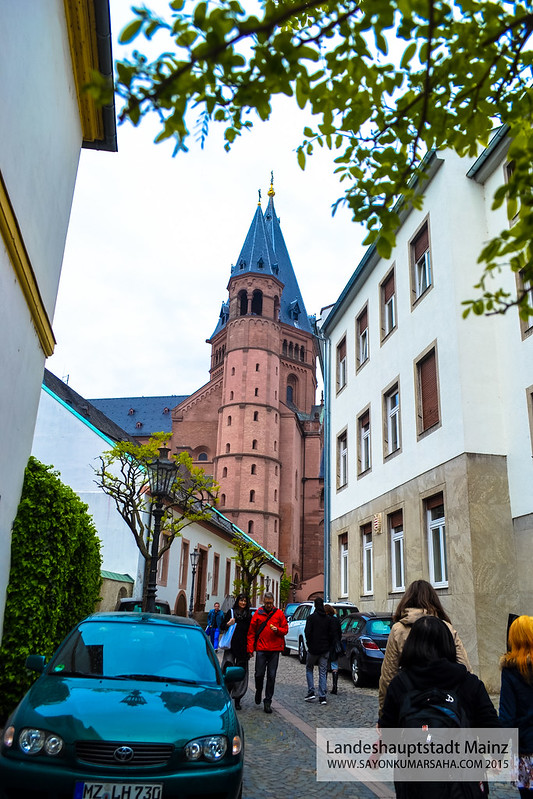 The St. Stephen’s Church is a beautiful Gothic Hall church in Mainz. 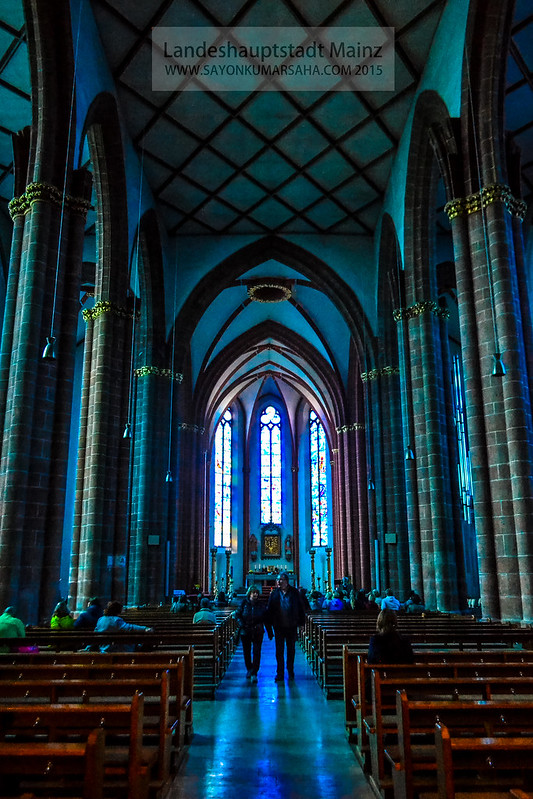 The Chagall windows of this church are something that is very unique in Germany. 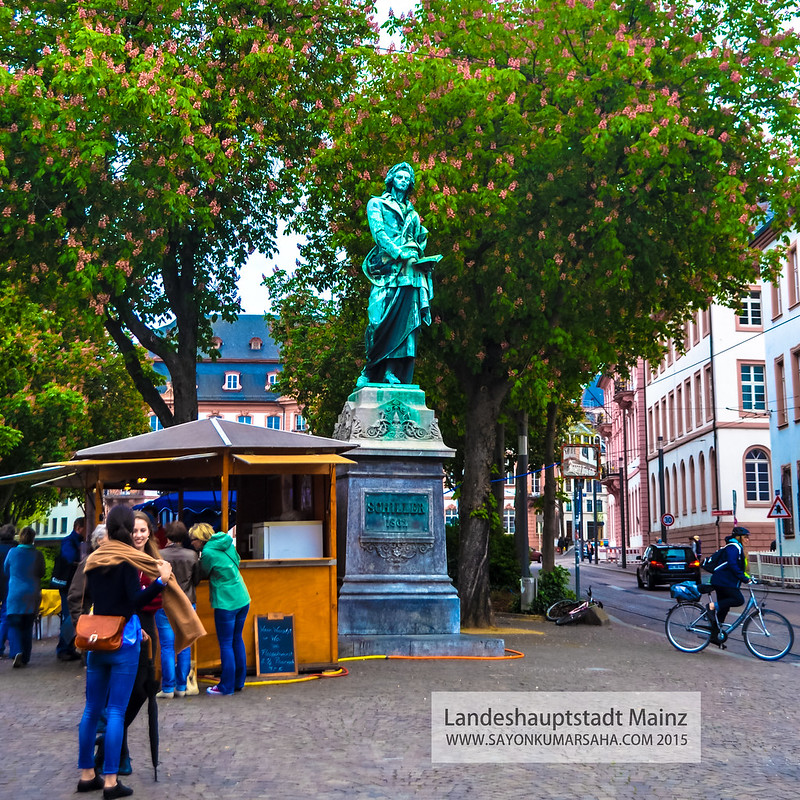 A statue of Schiller the German poet, at the Schillerplatz Mainz. 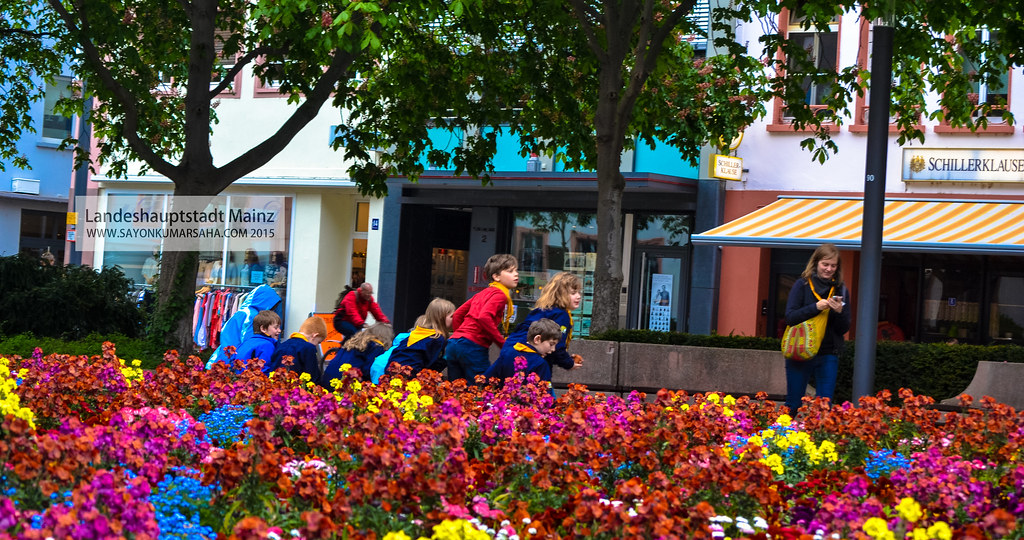 With the onset of spring, Mainz gets prettier everyday! 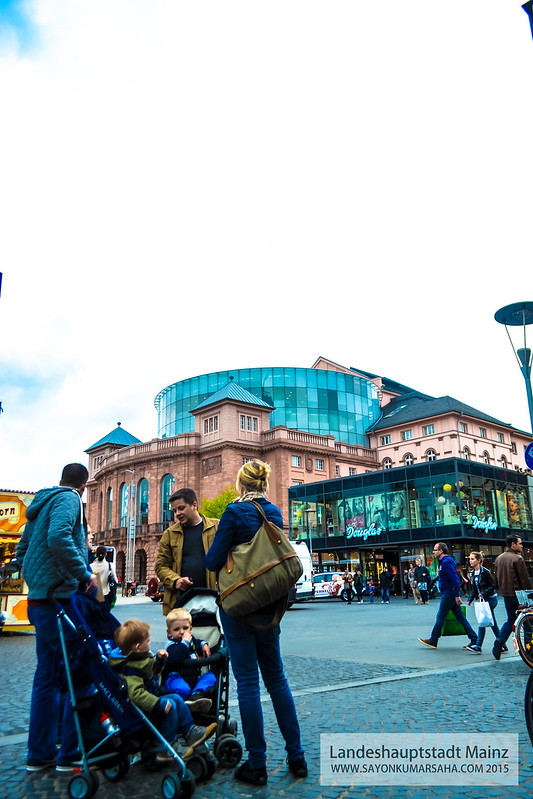 Member of the Great Wine Capitals Global Network, Mainz is one of the wine growing region right since the Roman times, at the end of the day it is the capital of Rhineland Pfalz, the wine sector of Germany. 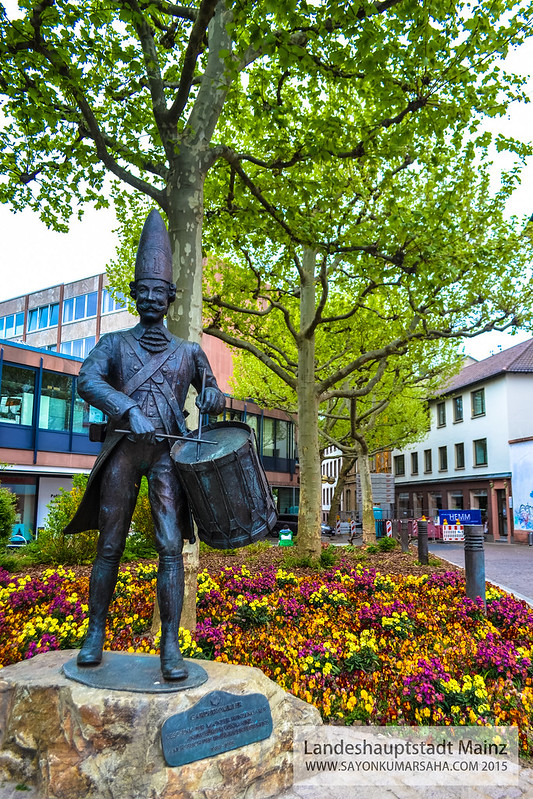 Mainz is proud of the saprkling wine it produces and the image of wine town Mainz is fostered all across. 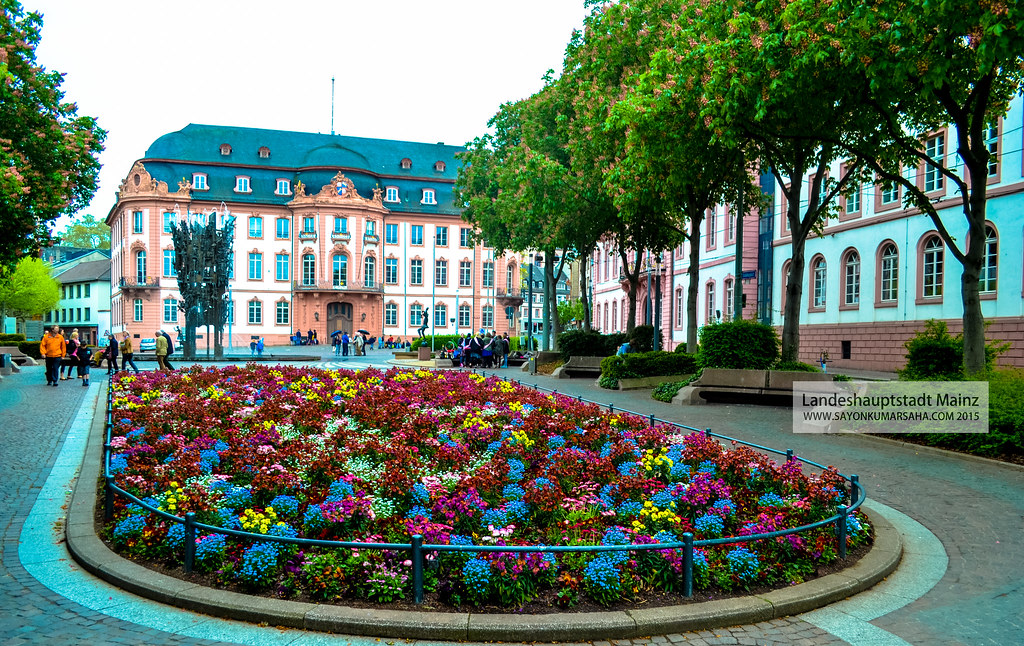 The beautiful platz for the famous Rhenish traditional Mainz Carnival that occurs in November every year. 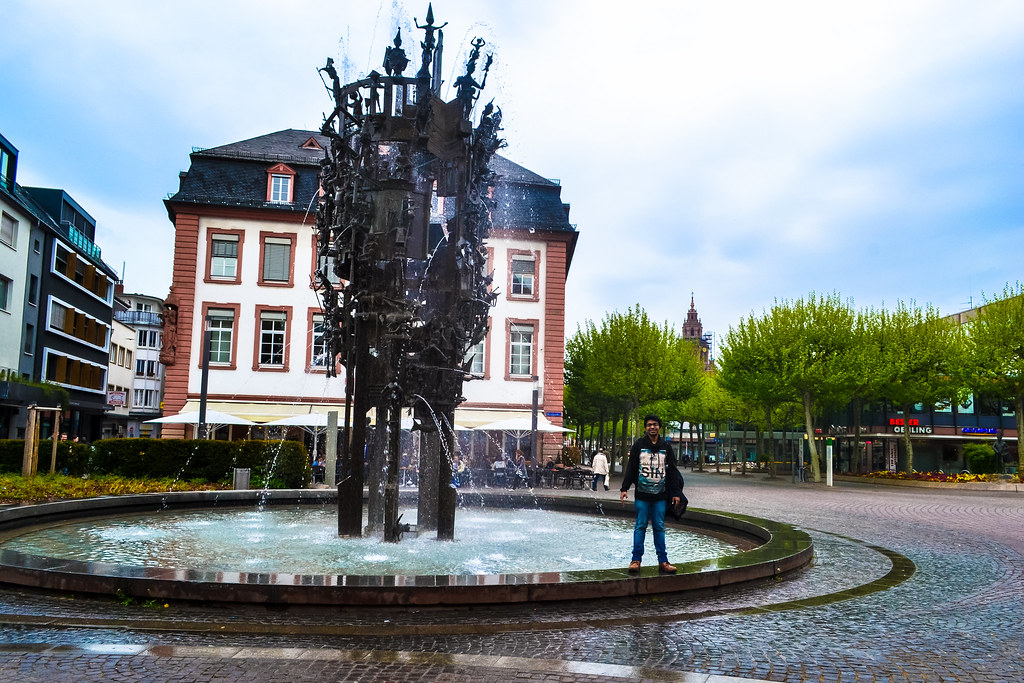 A not so sunny Satuday! Travel and local food. -with Federica,Simone, John (thanks for the above photo), Xinyu, Ferran, 叶文研, Zhang Olivia and Samson! 🙂