Strasbourg: The Christmas Capital of France.

It was pretty late the time I visited. Ideally it wasn’t Christmas anymore. 30th December, 2014. Terrible rush due to the end of the year and spine chilling cold at -3 degrees throughout the day, with occasional snowfall. But yes, the excitement of first time travelling outside Germany in Europe, somehow overshadowed the adverse weather conditions till a good extent. 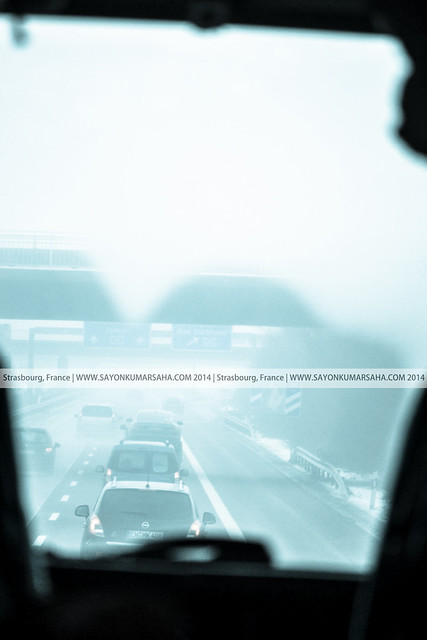 A tight rope between France and Germany, a city of inimitable Alsatian style with a good balance between the medieval ages and the progressive future. 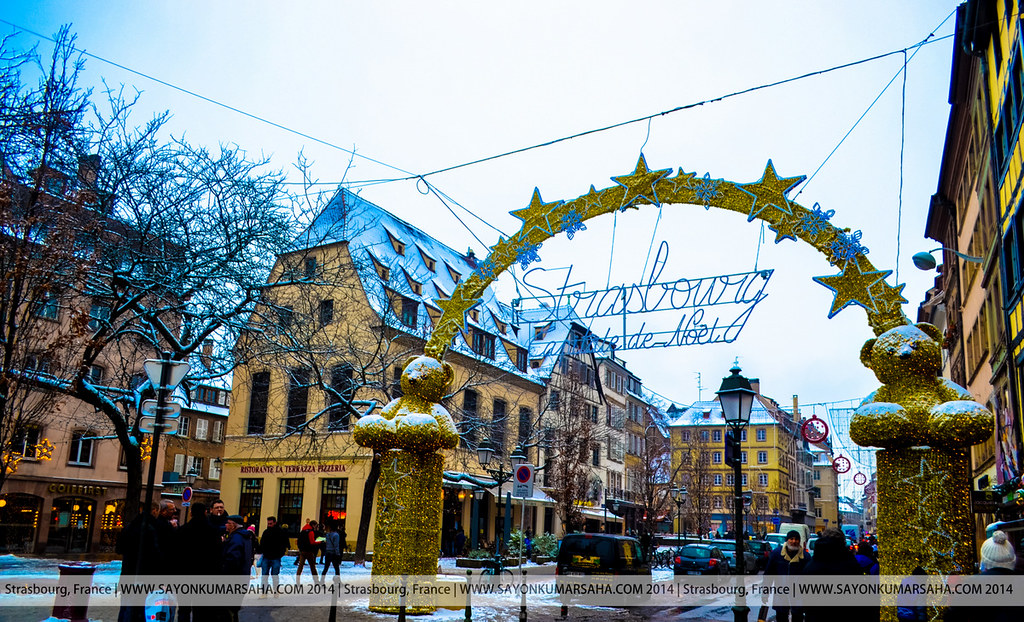 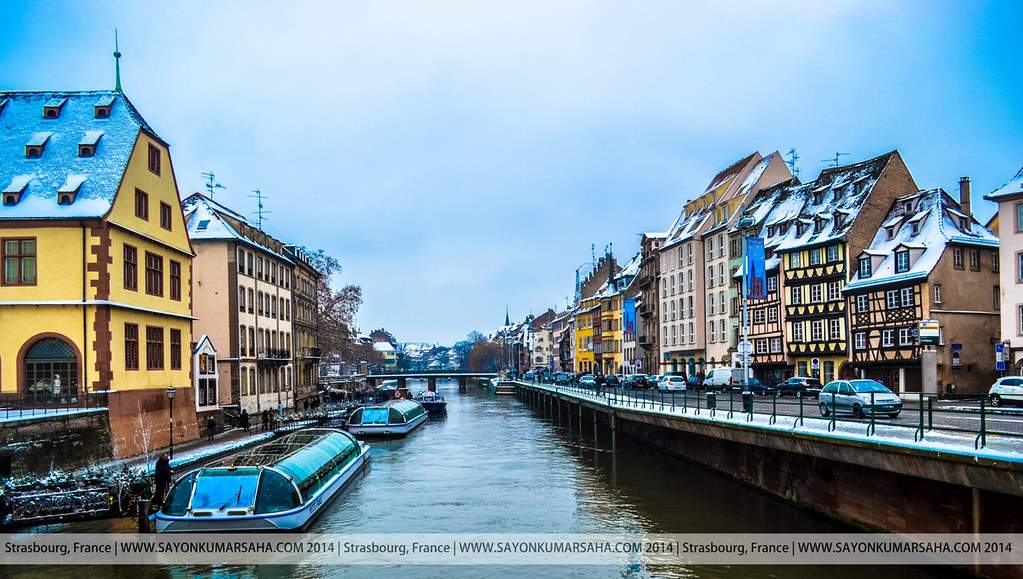 The beautiful river Ill in Strasbourg. 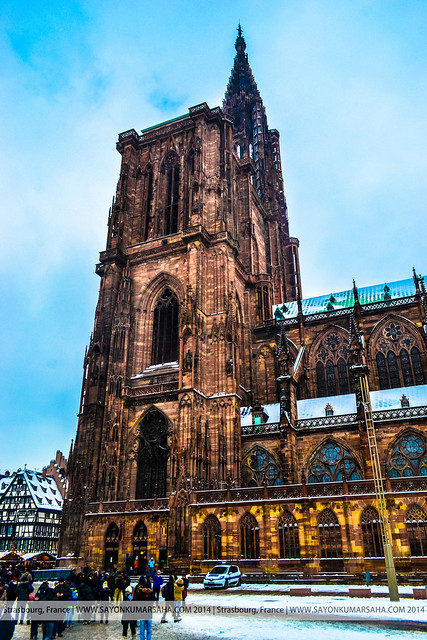 It is difficult to gaze away from the mesmerizing 450+ feet Gothic Cathedral. Known as the Cathedral of Our Lady of Strasbourg, the architecture stands out. Let me distill some facts and information about the historical architecture. 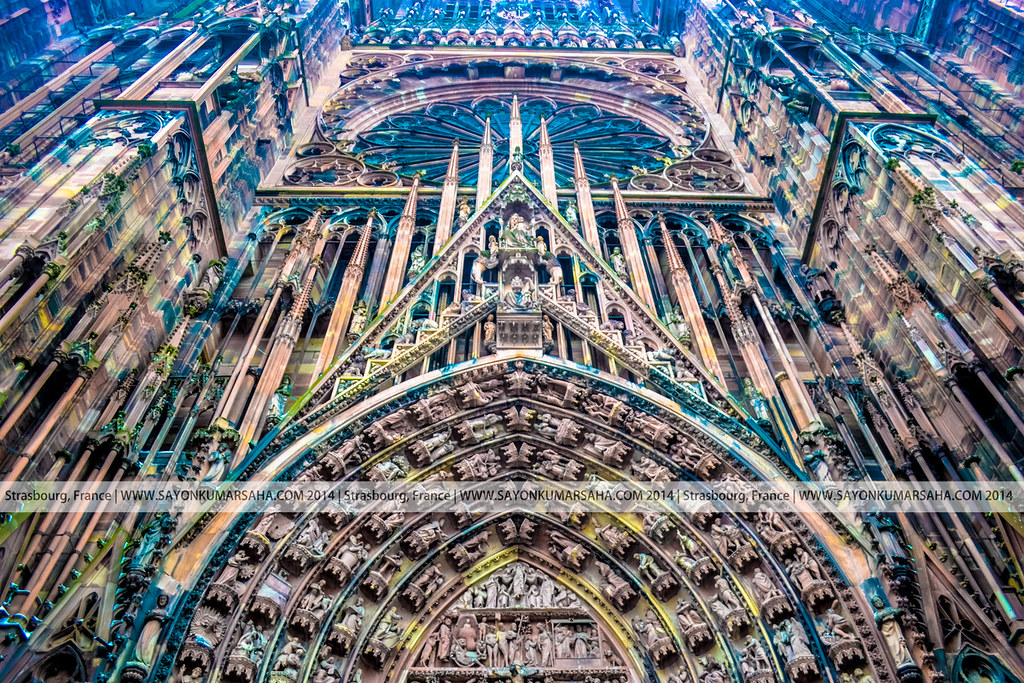 Strasbourg Cathedral de Notre-Dame is known as one of the most beautiful gothic cathedrals in Europe. The Cathedral stands on the exact site of a roman temple built on a little hill above the muddy ground. The first version of the church was starting to be built during 1015 by proposal of Bishop Werner von Habsburg, but fire destroyed most of the original Romanesque building. By the time that cathedral was being renovated (at the end of the 12th century, this time with red stones carried from the nearby mountains of Vosges), the gothic architectural style has reached Alsace and the future cathedral was starting to develop all characteristics of gothic aesthetics. The project of the first cathedral in Alsace was handed to craftsman and stonemasons who had already worked on the also famous gothic cathedral in Chartres. (Source: http://www.strasbourg.info/cathedral/)

Although the cathedral was at first financed by the local prince bishop, after his defeat, the municipal bourgeoisie took charge of the work themselves. Also, due to the lack of money, the citizens decided to contribute to the building fund with their private donations. (Source: http://www.strasbourg.info/cathedral/)

Principal work of the Renaissance, this mechanical astronomical clock is an invention put together by various artists, mathematicians and technicians. Swiss watchmakers, sculptors, painters and creators of automatons all worked together to build this amazing automate. The present mechanism dates from 1842 and is especially attractive for the work of its automatons, which, every day at 12.30 pm, all start their show. The first Strasbourg astronomical clock, L’horloge de Trois Rois, was being built from 1352 till 1354, but it stopped working in the beginning of 16th century.

According to a legend, the local authorities of Strasbourg ordered that the constructor of the Astronomic Clock should be blinded so that he could not try to build something like it ever again. This first clock was equipped with various mechanical details that were very rare in that time, such as calendar and astrolabe, as well as very interesting miniature statues. The main statue of the clock was representing Virgin Mary holding baby Jesus in her arms. In front of her, every hour, the three Kings would step out of their chambers and the music announces the time (this automate is now being shown in the Strasbourg museum of Decorative Arts).

At this moment, astronomical clock offers you a view of different stages of life, which are personified by a child, a teenager, an adult and an old man, who pass before Death. Above this are the apostles who walk before Christ. Their passage is punctuated by the beatings of wings and the song of a large rooster. In front of the clock is the marvellous Pillar of Angels, which, in a very original manner, represents the Last Judgment. (Source: http://www.strasbourg.info/cathedral/)

The cathedral has many other treasures: stained glass windows dating from the 12th to the 14th century, the St. Pancrace’s altar (1522) from Dangolsheim, the 17th-century tapestries forming the Virgin’s wall covering purchased in the 18th century, and finally a very popular curiosity, the astronomical clock set up in its own 17th-century case decorated by Tobias Stimmer and using an 19th-century mechanism devised by Schwilgué. To its left, there are 15th-century mural paintings. (Source: http://www.strasbourg.info/cathedral/)

The presence of an organ is attested as early as year 1260. There was also two other instruments built and modified in 1291 and 1327. The oldest sections of the actual organ case are not older than 1385. The bird’s nest was built in the same period. It is built in fir and is hung from the wall by a very large vertical oak beam down to the Samson’s statue. To the right, the mobile character depicting a pretzel dealer was the famous Rohraffe (crying monkey) who, with his arm and head, punctuated the insults shouted by a cathedral’s servant hidden in the loft during the procession on Pentecost Sunday. The city herald’s right arm (on the left) and the lion’s mouth are also mobile. (Source: http://www.strasbourg.info/cathedral/)

Inside, it is possible to admire the high Gothic styled baptistery made by Dotzinger (1453), the magnificent pulpit decorated with numerous statuettes sculpted by Hans Hammer in 1485, the Mount of Olives in the northern transept by Nicolas Roeder (1498), and the St. Lawrence’s portal dating from the middle Ages. (Source: http://www.strasbourg.info/cathedral/)

Victor Hugo: “The church portals are beautiful, particularly the Roman portal; there are truly superb figures on horseback, the rose-window is noble and well-cut, the entire front of the church is a clever poem. But the true triumph of this Cathedral is the spire. It is a veritable tiara of stone with its crown and its cross. It is a gigantic and delicate marvel. I have seen Chartres, I have seen Anvers, but I needed to see Strasbourg… From the belfry, the view is wonderful. Strasbourg lays at your feet, the old city of tiled triangular roof tops and gable windows, interrupted by towers and churches as picturesque as those of any city in Flanders. Personally, I would go from one turret to another, admiring one by one, the view of France, Switzerland and Germany via one ray of sunshine.” (Source: http://www.strasbourg.info/cathedral/) 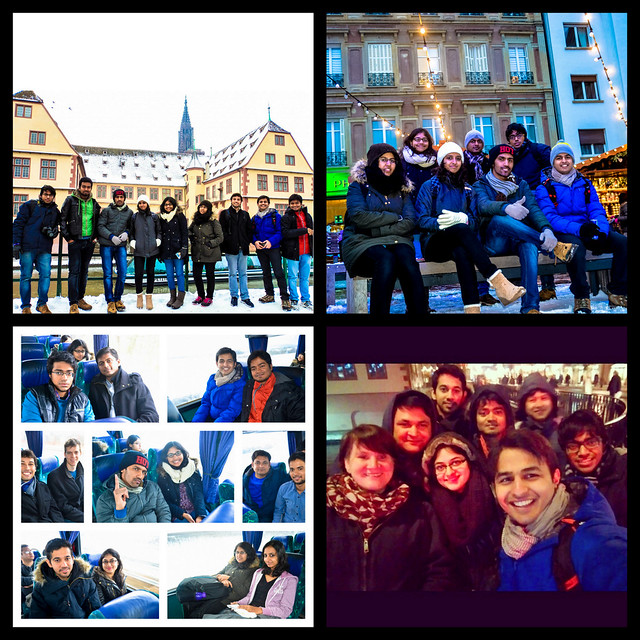 Some photos from the friends archive at Strasbourg..

It was in Strasbourg in 1570 that the very first edition of the oldest Christmas market in Europe took place, then called the “Christkindelsmärik” (market of the Infant Jesus). Since this time, Strasbourg has continued the tradition of a traditional, authentic, warm and generous Alsatian Christmas and these are all the reasons why “Strasbourg, the Capital of Christmas” continues to enjoy repeated success. (Source: http://www.noel.strasbourg.eu/)

With its some 300 chalets spread over 11 sites in the city centre, it is also one of the largest Christmas markets in Europe with various arts and crafts, food and typical Alsatian Christmas decorations. (Source: http://www.noel.strasbourg.eu/)

There is the Village of Sharing run by charitable and humanitarian organisations which is located at the foot of the Great Christmas Tree because Christmas would not be so warm and wonderful without this movement of generosity towards one fellows. (Source: http://www.noel.strasbourg.eu/)

Every year, during Christmas festivities, an additional touch of magic takes hold of the City as it discovers the country of honour. In 2014, Strasbourg hosted Belgium, whose charms one could discover in the Belgian Village. (Source: http://www.noel.strasbourg.eu/)

The very wide range of cultural events being organised to suit all tastes and all inclinations are amazing. Concerts, shows, activities and exhibitions can be explored throughout the narrow streets, the squares and historical buildings. (Source: http://www.noel.strasbourg.eu/)

For the occasion, the city dons its most beautiful finery and is illuminated by several hundred kilometres of Christmas lights and decorative objects. One simple cannot miss the Great Christmas Tree, on place Kléber. This is an age-old Strasbourg tradition recorded in a manuscript dated 1605 describing the fir trees adorned with decorations in the guild halls of Strasbourg during Advent. (Source: http://www.noel.strasbourg.eu/)

The city is well known for it’s its medieval cityscape, especially because of these timber-framed buildings which are patent to this region. The architecture seems to create an optical illusion when seen in real, and is pretty much mind boggling.

This photograph was shot from inside the staircase of the museum.. Yes I did spend a couple of hours at the Musée Historique de la Ville de Strasbourg or Historical Museum of the City of Strasbourg. The museum was huge and enchanting with the Roman history. But for me, it was more of a rescue from the biting cold outside for some time. I really did not explore much of it due to time constraint, and instead made me a point to move around the French lanes and  spend the day more under the open sky.

“Strasbourg Capital of Christmas”, is undoubtedly an unforgettable journey into the magic of Christmas for one and all!