When we arrived at Zurich, it was 25 degrees with no rain for a change.
Almost the best possible weather condition I could have hoped for in the month of May. 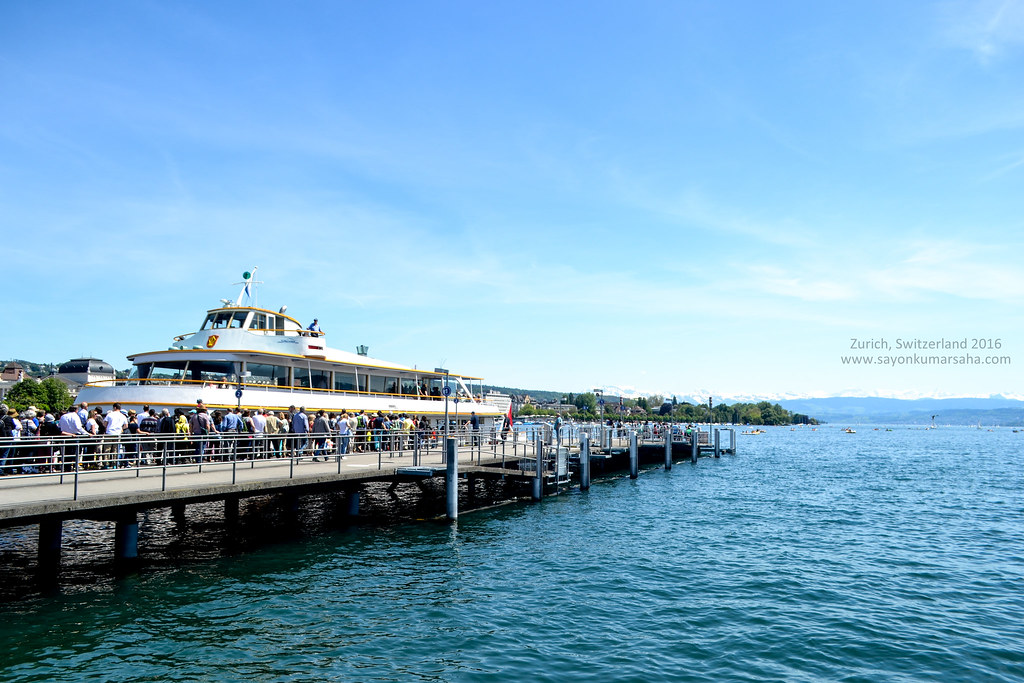 Right at the heart of Europe, Zurich is the largest and the wealthiest city of Switzerland.
I had known Zurich to be one of the most expensive cities with top level life-quality.
But what I found also interesting is the way the top-quality infrastructure is set amidst the natural surrounding. 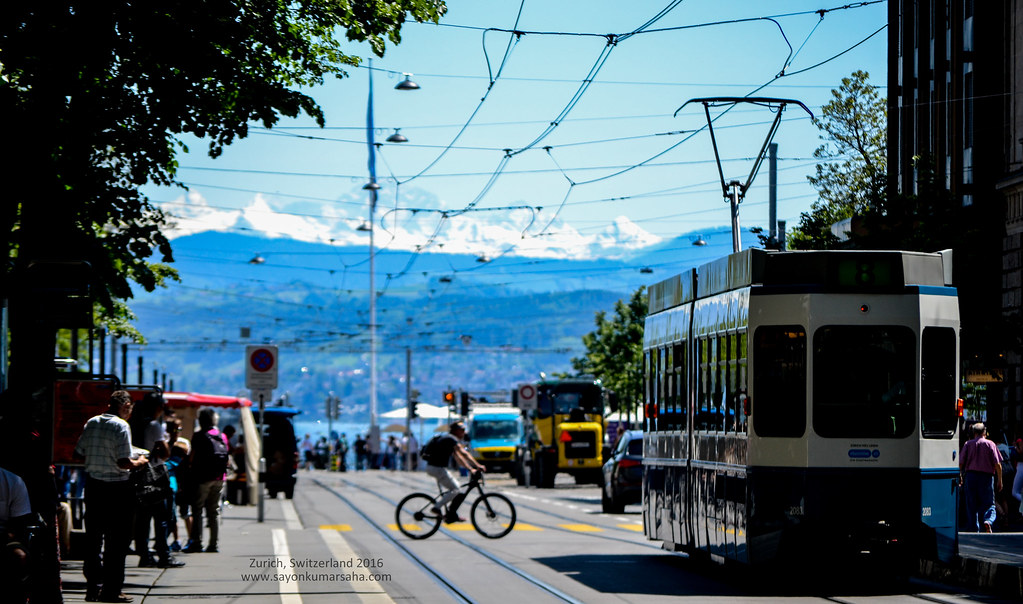 It is an extremely vibrant and busy financial city in the middle of the river and lake overlooking the Alps. 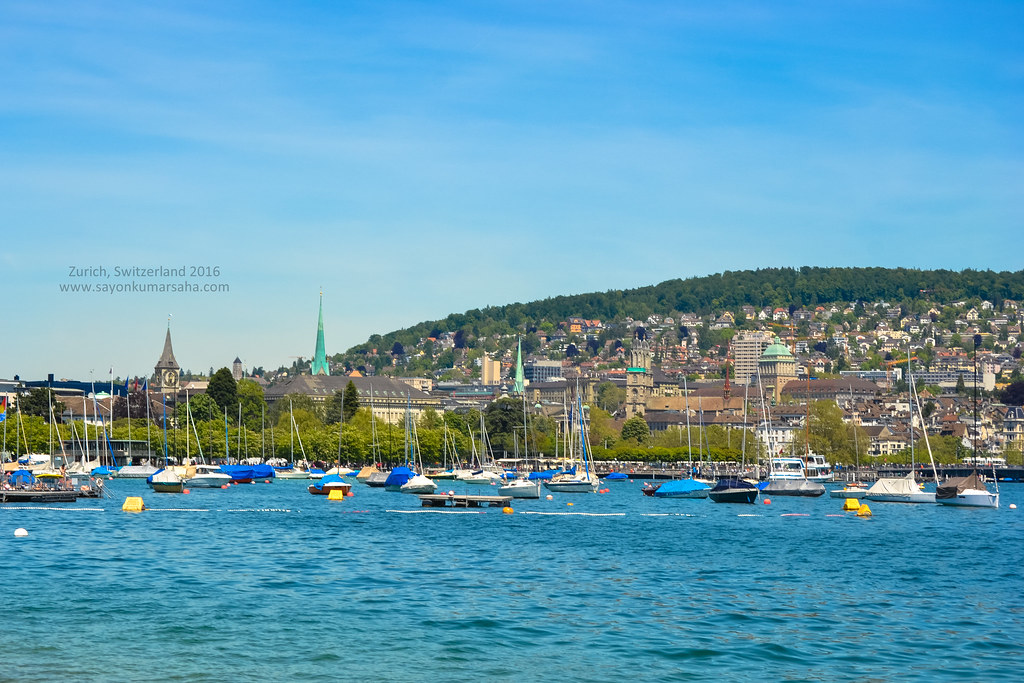 The banana shaped Lake Zurich (Zürichsee) extends the south-east of the city stretching a total of 40km in length and 3km in width.
It was formed by the Linth river rising in the glaciers of Alps. 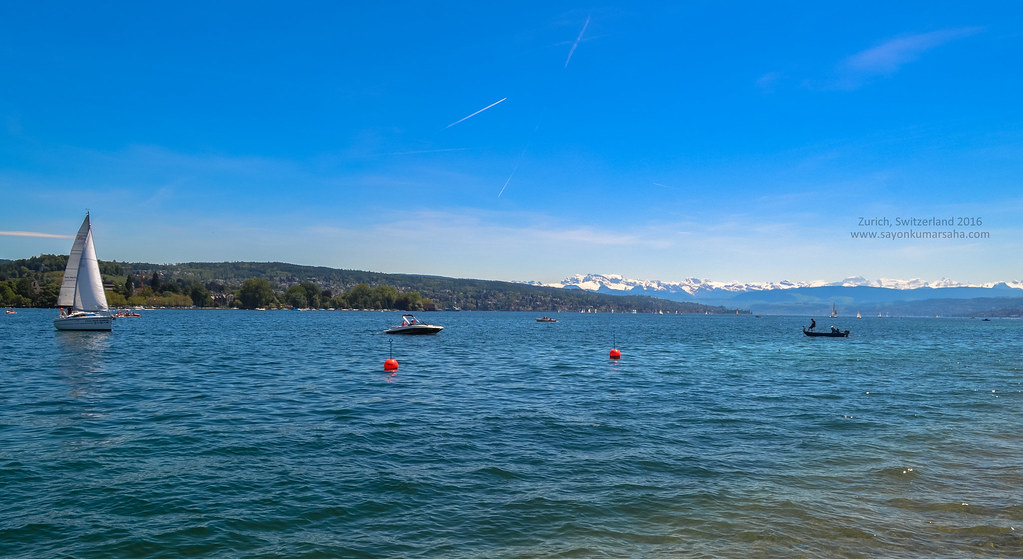 The snow-capped Alps at the horizon of Lake Zurich is spectacular.
I wonder how beautiful would dawn and dusk be here!

Nevertheless, the summer afternoon had it’s own charm! 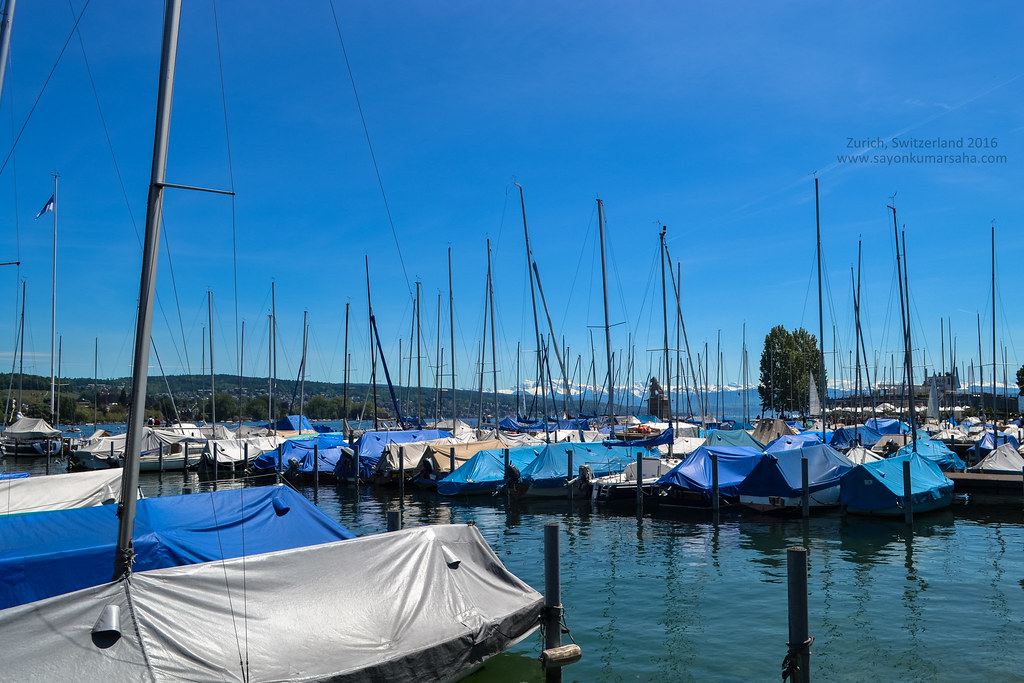 There was a time in the past when it was a major traffic route.
But now it is more of a tourist and excursion destination. 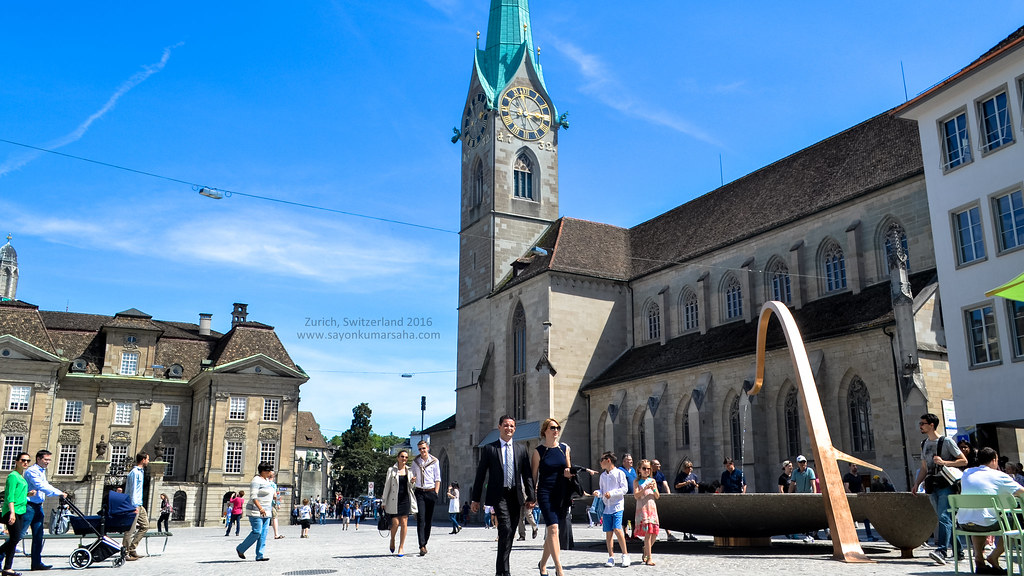 Walking by the lanes, it was easy to realize the difference in high life-quality of the people living here.
The famous shopping street of the Bahnhofsstrasse is one of the most happening shopping destination of the world.
The view of families going around shopping and eating in this area, is a perfect picture of shopper’s paradise. 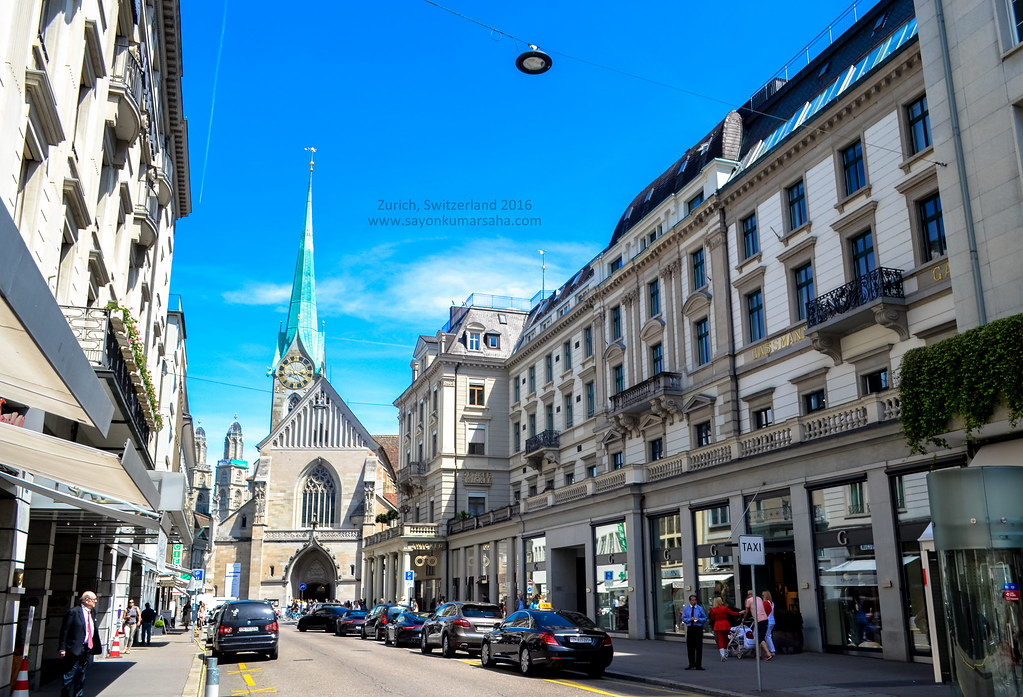 The Lindt & Sprüngli chocolate headquarter is also here.
I am not a huge chocolate fan, but I remember how fascinated Divya was, when we entered the Lindt Chocolate Shop at Kilchberg.
We missed out the visit to Uetliberg, a hill in the outskirts of Zurich that lets you have amazing bird eye view of the city. 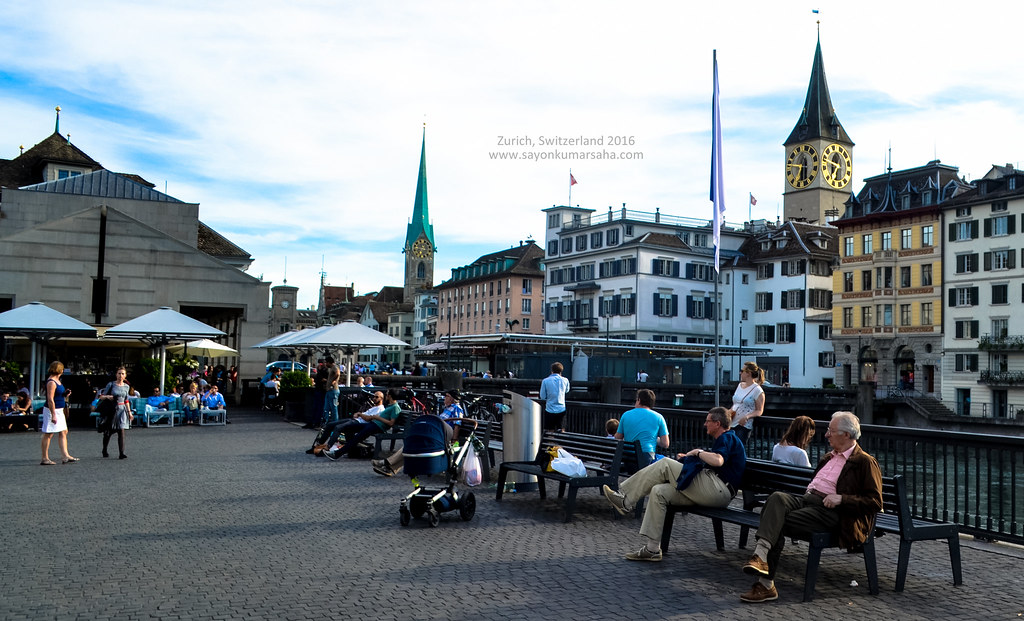 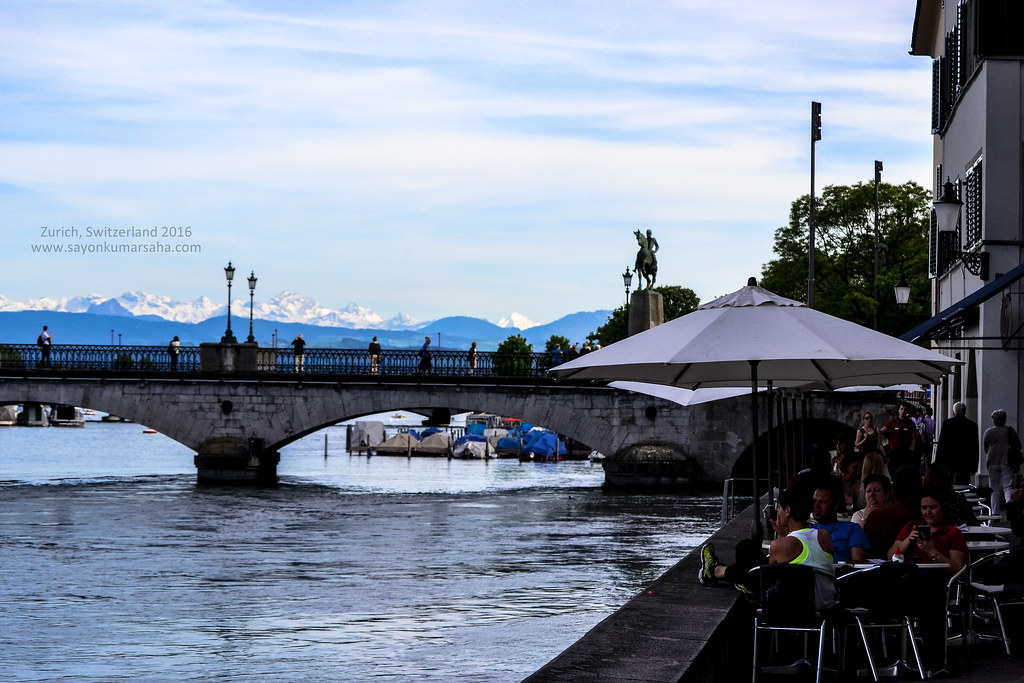 It was common to see families and friends having a good time by the street in the evening.
The official language of Zurich is is German. But people genrally speak the Swiss-German.
A German would complain it to be a corruption of the original language!
For me, if I understood German 40%, I would understand this new dialect maybe 10%! 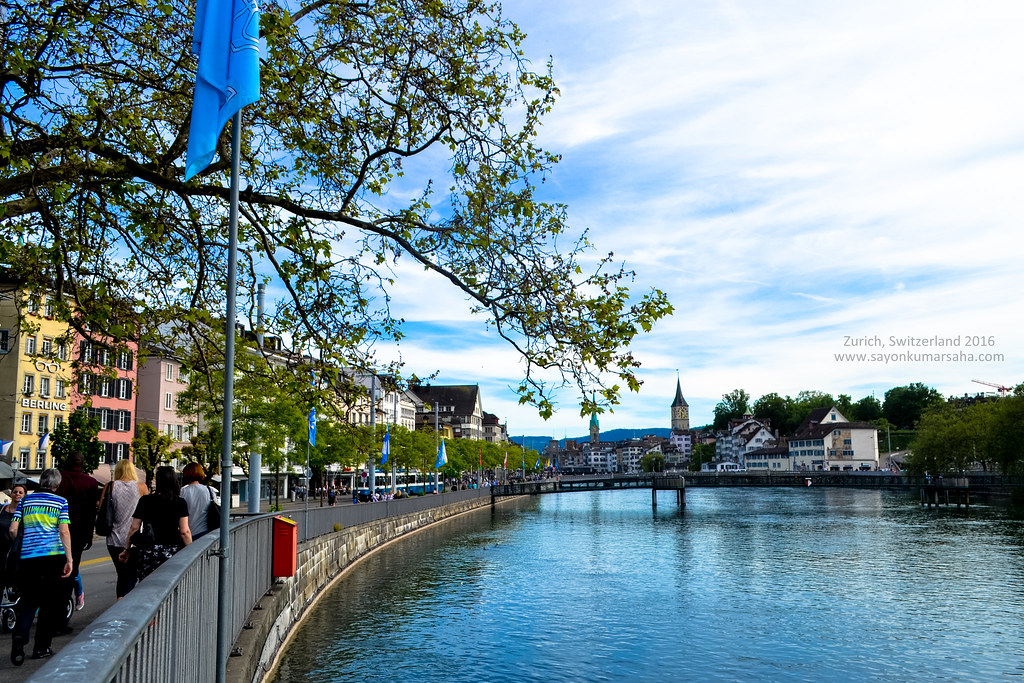 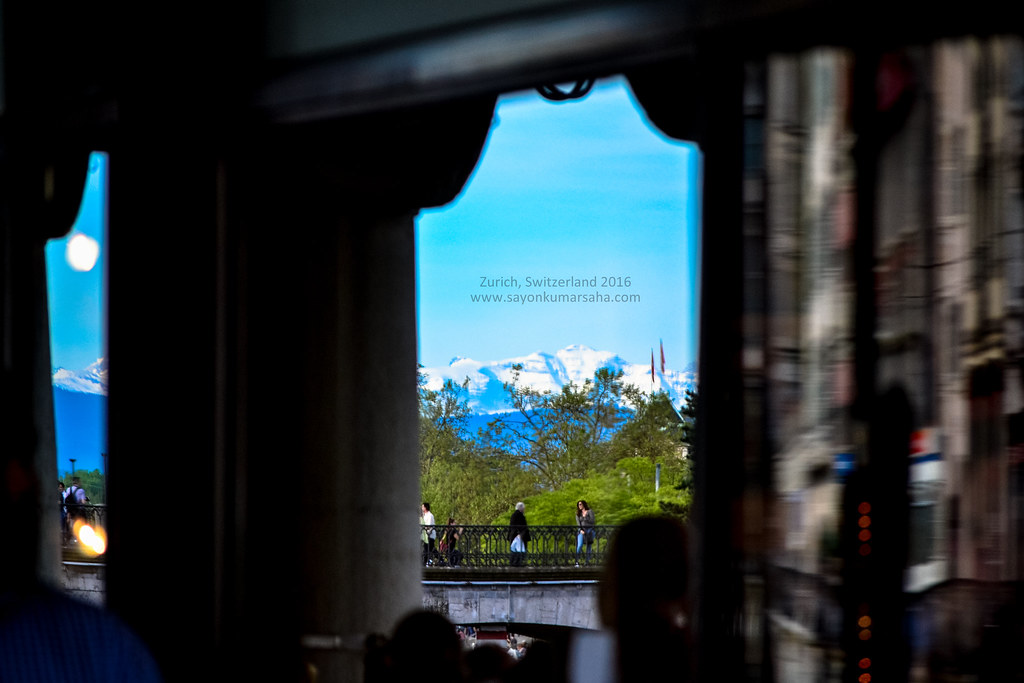 Let alone the view of the Alps, walking along the Limmat river was beautiful I must confess. 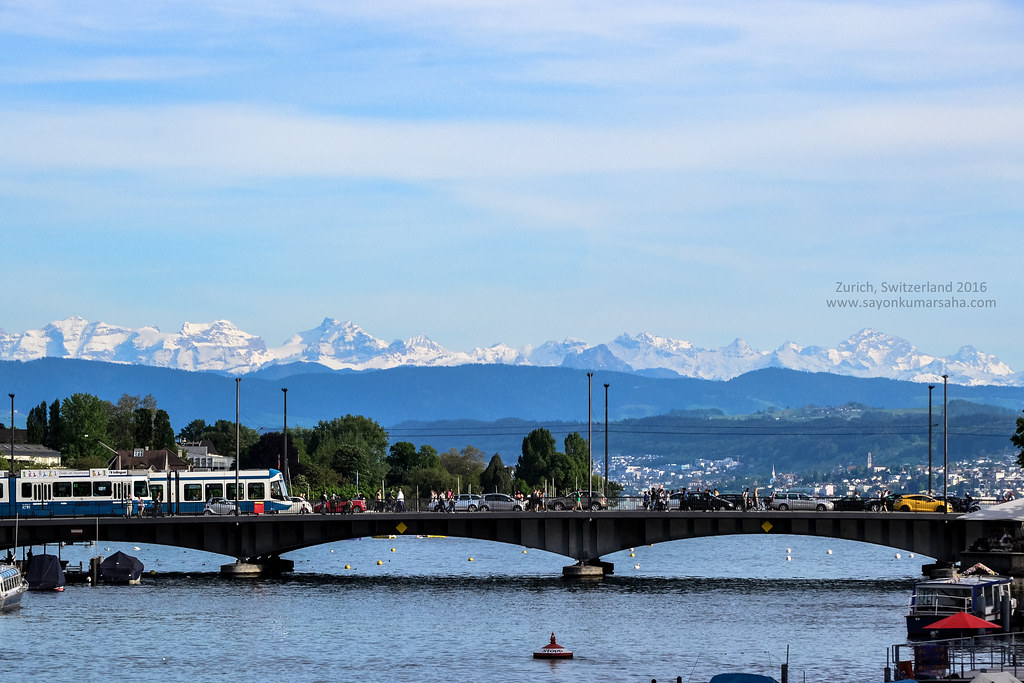 The innumerable bridges spanning the river one after the other over-looking the snow-capped mountains, is a distinctive feature here. 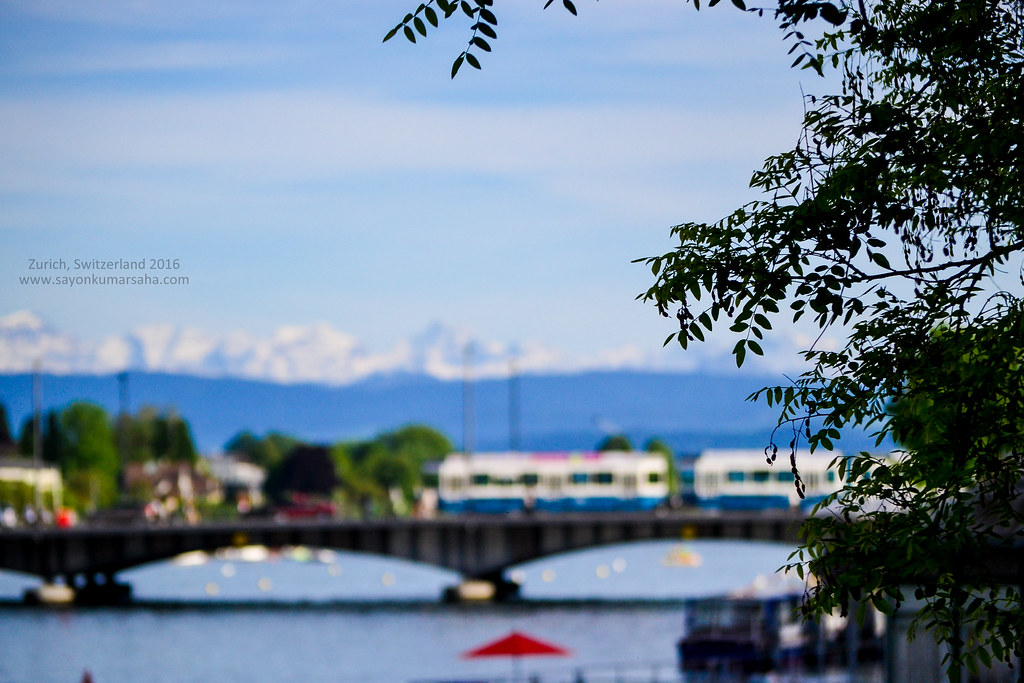 Friendship? Cheers to the #goodtimes and the #holidays !! Best of the best #friends and #travel ! What else! ? #alps #summer #urban #zurich #travel #europe #swiss #switzerland #sunbath

We relaxed by the bank for an hour and had some good sunshine! 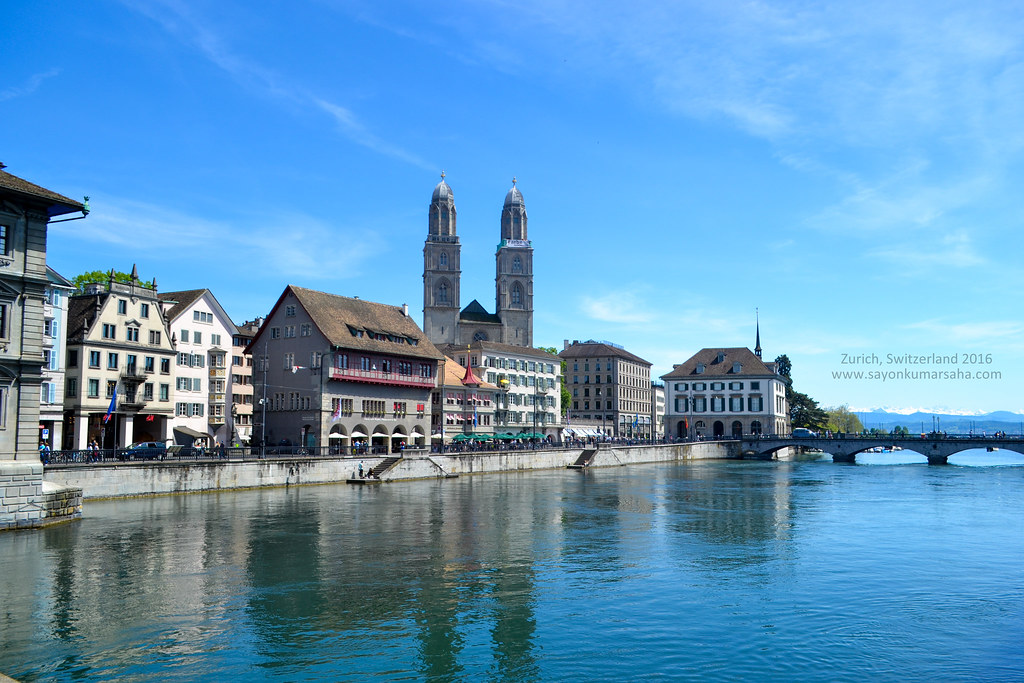 Also all of Zurich’s iconic landmarks such as the Grossmunster, Fraumunster and St Peter’s are visible from the river. 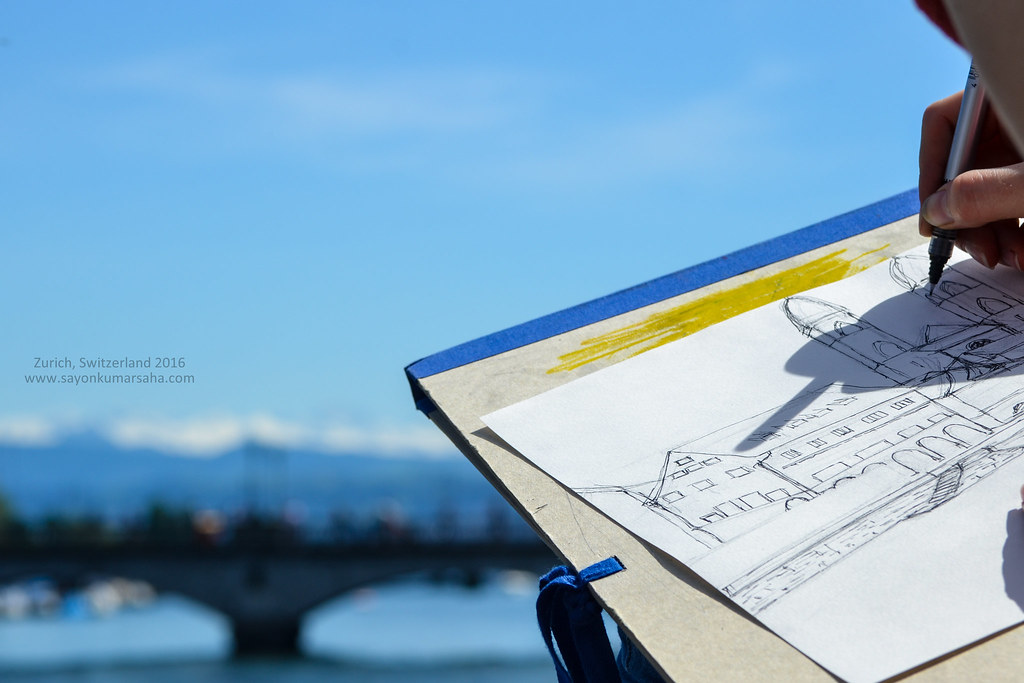 It was here that I found this girl sketching the pretty view of Grossmunster. 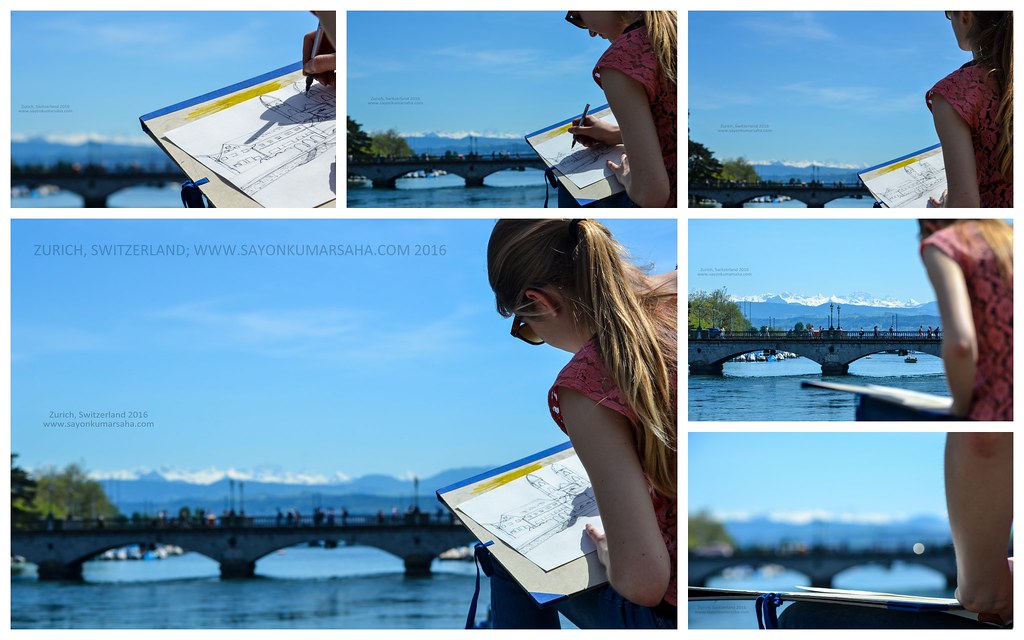 Mara was kind enough to let me take some photographs with her in the frame. 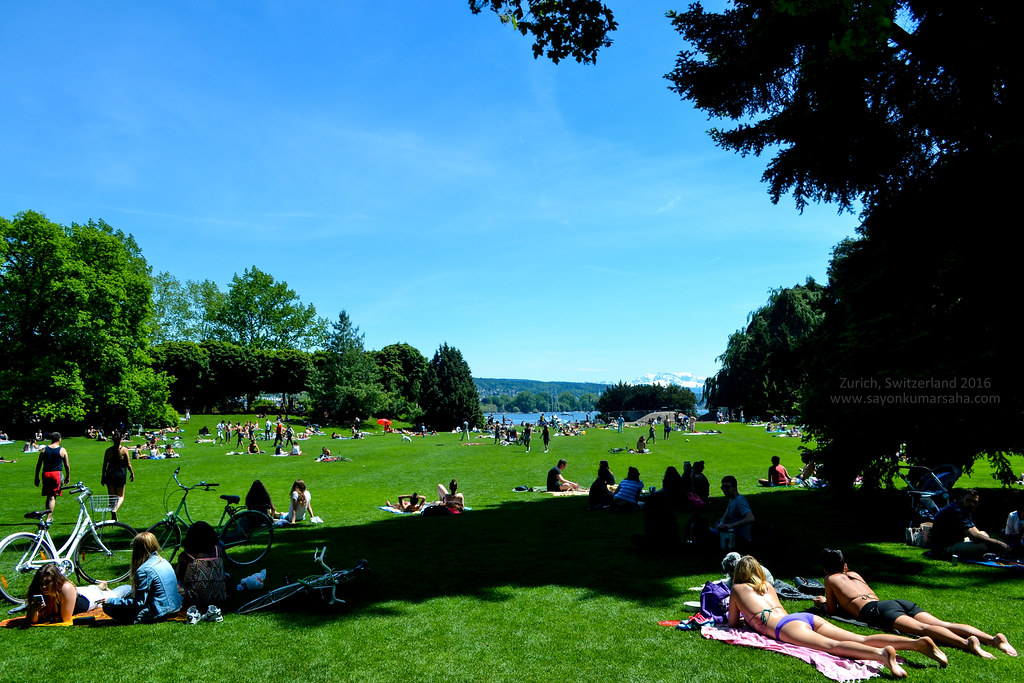 The lawns overlooking the lake and Alps were filled with people having a good time: sun bathing, reading, talking, playing, cooking and grilling! 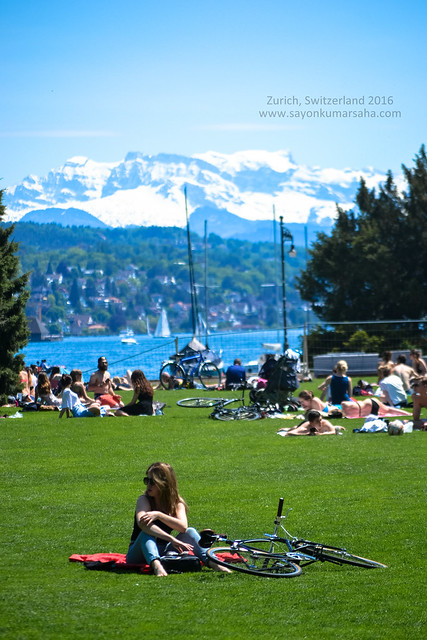 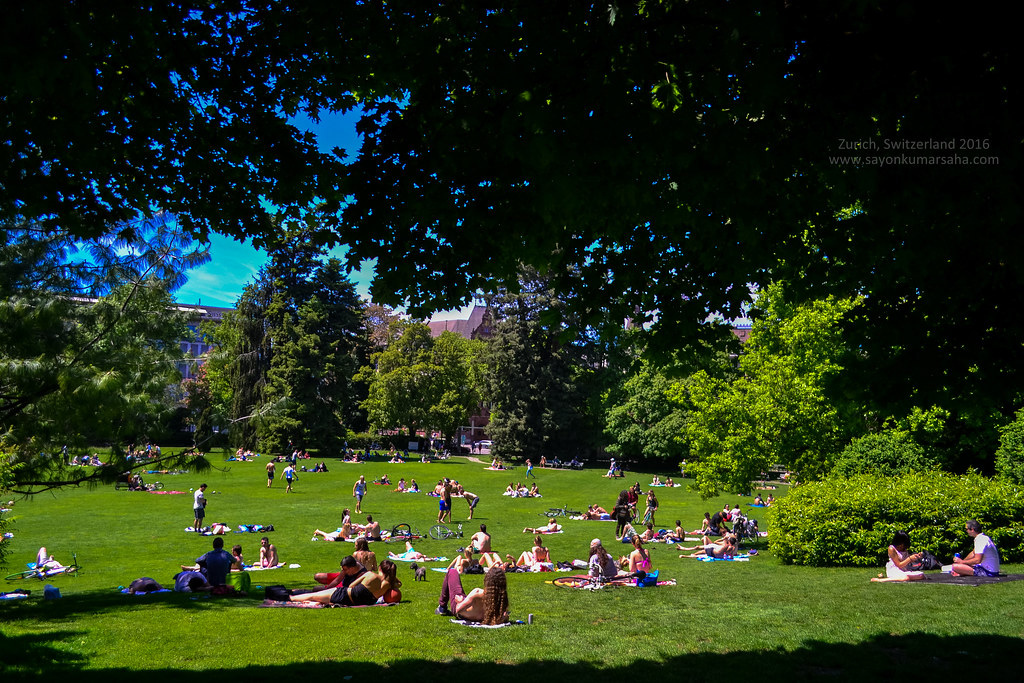 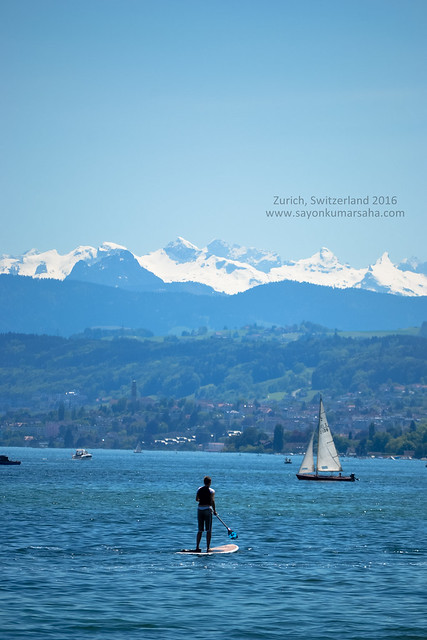 We didn’t take a boat ride or do some water sport. But along with Luis and Divya, we had a perfect summer evening to chill I would say.

After we were done walking around the city, it was indeed a good idea to simply sit by the lake for some hours. 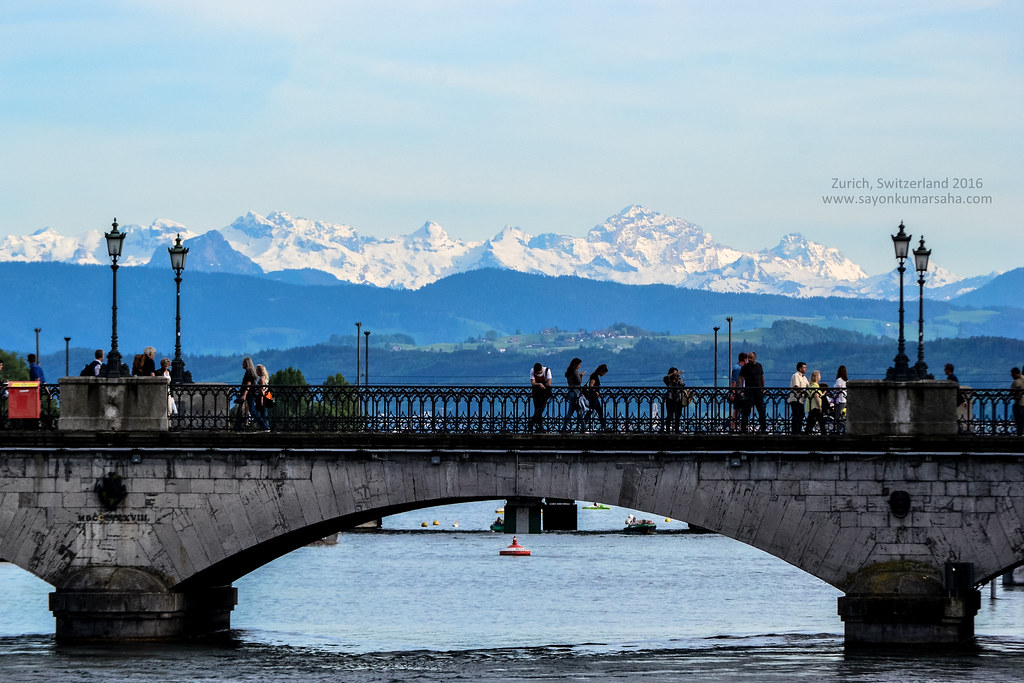 Probably the nicest urban setting on the earth.